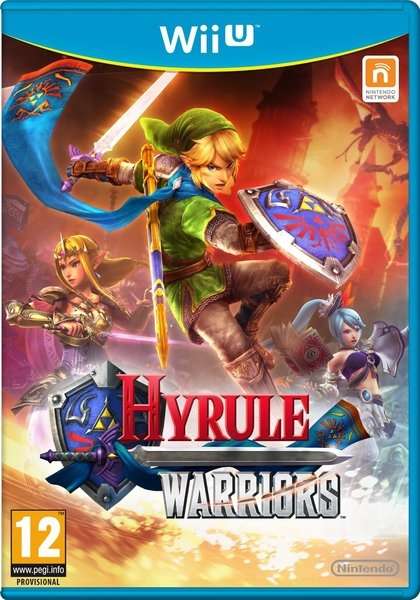 Hyrule Warriors is a very interesting game in that it takes the characters and the setting of The Legend of Zelda series and combines it with the gameplay of Koei Tecmo’s Dynasty Warriors series. It’s interesting to see Nintendo handing one of their most popular franchises over to a third party developer like this and I hope that this kind of experimentation becomes more common in future.

So what is the gameplay of the Dynasty Warriors games? Well, you essentially have to slash your way through huge groups of soldiers on a large, open 3D map, capture certain bases and defeat especially strong leaders in the enemy army. Meanwhile, you have your own bases to keep safe and you have to protect the leaders in your own army too. It’s fairly simple and you’d think it might get repetitive, but with a selection of popular characters and locations from throughout the history of the series, it never happens. Since every character can level up and you use resources gained through battle in order to buy items and forge weapons to make you more powerful, it is honestly quite addictive and very satisfying to play.

The storyline officially does not take place within any part of the official Zelda timeline, which I find quite disappointing, but it is a story which will make fans very happy. It starts with Link has an average soldier in the Hyrulean army, when Hyrule Castle is attacked. Link joins Zelda and Impa in helping to defend the castle and before long they go off on a quest to find out who is attacking them and how to stop them. I wouldn’t like to spoil any details, but it involves a new villain, a new ally, lots of returning characters and even time travel. Excitingly, you’ll find yourself revisiting locations from The Legend of Zelda: Ocarina of Time, The Legend of Zelda: Twilight Princess and The Legend of Zelda: Skyward Sword.

The story isn’t all that long, but once you’ve completed it you can play through any of the levels again on extra difficulties to get more resources and you can try older levels with characters you’ve unlocked since your first play. There are also Golden Skulltulas which are a kind of spider which appear at certain times on certain maps and will earn you pieces of illustrations if you defeat them (fans will recognise them from previous games.) There’s also ‘Adventure Mode’ which gives you a different challenge for each section of the map from The Legend of Zelda for the NES – these challenges can gain you new weapons and even characters for completing them. I certainly played for a long time after finishing the story.

For me,  one of the biggest appeals was the cast of characters. You have Link, of course, who everybody loves, but then you also have Zelda (who fights with a rapier), a new (very interesting and likeable) magical character called Lana, Darunia (who uses the Megaton Hammer), Agitha (who comically uses her umbrella) and lots of other popular characters too. What’s quite refreshing about this selection of characters is that there are more females than males, which is quite uncommon for games like this. Or games in general.

You can pay to access additional characters too, who are also very appealing. Young Link, Twili Midna and Tingle can all be downloaded and I have to say that I was absolutely delighted by the inclusion of Tingle. You can also download extra costumes for your characters, plus new story chapters and challenges too. There is a lot of content in Hyrule Warriors. Additionally, you can also download the extra content added to the 3DS release Hyrule Warriors Legends, but I will talk about this in a separate review.

This is a very fun and addictive game and I would recommend it to anybody. While I do believe that the appeal of Hyrule Warriors is quite broad, it’s going to be especially appealing to huge Zelda fans as it was clearly made with them in mind and is full of lovely little connections and references. When you also factor in that this game has a fantastic soundtrack and looks very nice too, you’ll realise that this is definitely worth a try. Even if you’ve never played Zelda or Dynasty Warriors before, it could be the game to get you into either franchise. Very fun all round.