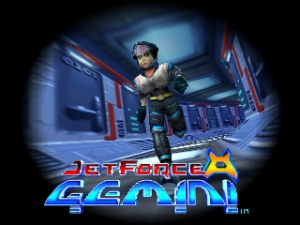 Rare may be best known for their games featuring anthropomorphic animals, but their master video game development skills span across all genres. Jet Force Gemini is an action packed, sci-fi, third person shooter adventure and it sits amongst the ranks of Rare’s best work.

The game follows the Jet Force Gemini team (brother and sister twins, Juno and Vela and their dog Lupus) as they travel across the galaxy fighting the Drone army of the evil Mizar, who has enslaved the innocent Tribal race. The Drones are a race of ant creatures who are quite creepy in an insect-like way and the Tribals are a race of friendly bears. It’s not too much of a complicated story, but through interactions with various NPC characters and by exploring the various planets, the world begins to feel very developed.

At first the game is quite linear and you just go through a sequence of levels until you get to a specific boss battle. Once that boss has been defeated, the game really opens up, allowing you to return to old worlds to find new areas, levels and alternative paths. This exploration element was something which I really enjoyed. The world felt very immersive to me and I got very exciting as I discovered areas which felt like a genuine secrets. The planets were exciting and mysterious and it was great to visit different places as different characters to find new things.

Plus, on top of all of these things, there’s that classic Rare charm that they somehow seem to incorporate into all of their games. There’s a big carving of Mr. Pants up on the wall of an ancient temple, almost every NPC has their dialogue written in a cockney accent, enemies die in hilariously over-the-top violent ways and you often find Drones and Tribals doing all kinds of funny things (such as dancing in a secret Drone nightclub.) You can even race on a Diddy Kong Racing track in the multiplayer mode! It’s a great game all-round and I could only really fault it on two things: frustrating boss battles and a control scheme that takes a little while to master. Other than that, I strongly recommend this game.