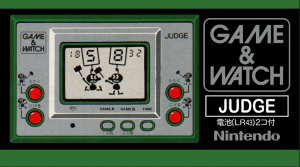 I’m quite a big fan of the Game & Watch series of games and I appreciate the fact that Judge attempts to do something different to the rest of them. Usually Game & Watch games will take a menial task and make it a fun thing you can do to earn points, but Judge requires a lot more thought than the others and can even be enjoyed as a multiplayer game too.

So, basically, two Mr. Game & Watch lookalikes stand facing one another and holding giant hammers with one hand. Eventually they will use their other hand to display a number between 1 and 9. Once you’ve had a time to assess both your own number and the number of your opponent, you need to take action. If they have a lower number than you, it means they’re weaker than you and you need to hit them with your hammer. Doing this will earn you points, but hitting them when you’re weaker will lose you points. If the opponent’s number is higher, you need to dodge and you’ll gain points for a successful dodge, but lose them if you dodge when you’re the strongest. If both the numbers are the same, it’s whoever strikes first who gets the points.

It sounds like a simple premise, but you need to have very quick thinking skills if you want to do well at it. You’ll find that this game has hidden depths. I wouldn’t be surprised if playing it is quite a good form of brain exercise, actually. It’s really quite addictive, too and it could be a great way to pass time with someone (perhaps, on a train or in a car.) Playing against another a human would definitely be best, but the option is there if you’d like to play against a computer player.