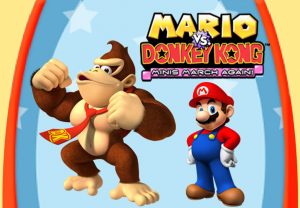 The Nintendo DSi was a little bit disappointing for me. I thought it was going to be the next big console in the DS family, but then it ended up getting almost no games – or at least, almost no games which were physically released. There were a fair few downloadable ones, but most of these were quite obscure and forgettable. Mario vs. Donkey Kong: Minis March Again! is one of the more interesting games from the DSi eshop.

This is the third Mario vs. Donkey Kong game and you may notice that it has a very similar title to Mario vs. Donkey Kong 2: March of the Minis and this isn’t a coincidence. While this is a standalone game, it is essentially an expansion to its prequel, so don’t go into it expecting anything particularly mind-blowing or innovative.

Having said that, I don’t want to imply that this game is a boring retread. The previous installment introduced us to the satisfying gameplay of guiding Mini-Marios through hazardous courses so that they could reach their exits unharmed. This game changes things so that instead of doings things to guide the Mini-Marios (like making them stop or making them jump) you’re manipulating the environment around them to keep them safe. It adds an interesting new dynamic to things which, for me, kept it fresh. You actually have no control over the Minis, other than tapping them to get them to start moving and in later levels, they start walking the moment you start the level. Once again, it feels great to get them all safely to the exit door.

It’s a small and simple game, but I enjoy it and since it’s not particularly expensive, I think it’s worth a try – especially if you enjoyed the previous game. The biggest downsides are the fact that the boss battles against Donkey Kong are all recycled almost exactly and the soundtrack is near identical too. On the other hand, the animation and overall presentation has been polished and so is slightly better than the last game. I also really, really liked the characterisation of Donkey Kong and Pauline – the ending made me laugh quite a lot.

So if you’re a fan of Mario, or a fan of Donkey Kong or are just someone looking for a nice, cheap puzzle game, then why not give this a try? I think it’s pretty good, all things considered.