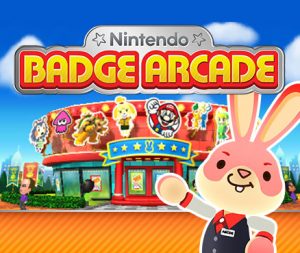 The Nintendo Badge Arcade is a free downloadable game for Nintendo 3DS consoles. Basically, it’s a set of crane games, where you have to pick out badges (which are all based on various Nintendo characters.) These badges can then be used to decorate the home menu screen on your 3DS. To some people, I am sure that that sounds really boring, but personally, I loved it.

Every time you play the game, you’re greeted by a pink rabbit who’s only ever been called “Arcade Bunny.” Until they stopped adding new badges, he’d have something new to say every week. He’d introduce the latest set of badges, talk about offers and make lots of hilarious jokes about the games the badges were based on. He would also transform into various other forms too – like a realistic rabbit and an enormously muscular version of himself. He was very amusing and he made playing the game regularly quite entertaining.

The badges themselves were pretty great too. Pretty much every major Nintendo franchise was included in some way (but there were one or two exceptions.) I was most pleased whenever completely new artwork was used to make badges. For example, one set had WarioWare characters dressed as characters from The Legend of Zelda: Majora’s Mask – needless to say, I loved it! It was also nice to see even obscure things like BOXBOY! getting their own badges.

What’s even more impressive is that some characters even received some level of development through these badges. For example, Nikki. Nikki had previously appeared in the Nintendo Letter Box but had never really done very much. In this game, we get loads of badges showing her doing all kinds of things, like having a day out on the beach with her animal friends or celebrating Christmas. We even got to see a nice sort of friendship blossom between Nikki and Ashley (from the WarioWare games) due to the fact that several of the sets depicted the pair of them having different adventures together.

One set of badges in particular (which had me very excited) was Nikki, Ashley and the Arcade Bunny visiting Inkopolis (from Splatoon.) Another great one had Nikki trying on the hats of several well known characters (like Mario and Link.) I think a lot of it was made to please the fans and I certainly was pleased. It wasn’t just the “cute” Nintendo characters, either. There were several sets made using artwork from Fire Emblem Fates and another using artwork from The Legend of Zelda: Breath of the Wild.

Although I do have to admit that I was a little disappointed some weeks. For example, they made badges for every single Pokémon, which is impressive, but it also got repetitive. There were an awful lot of sets which were just items of furniture from Animal Crossing or things from mainline Super Mario games. Meanwhile, there were barely any Donkey Kong badges (Dixie Kong never got one!), not a single Mother badge and no Super Smash Bros. badges.

Also, while the game was free to play, you had to pay if you wanted more than a few tries at catching the badges. This was mostly fine, because I felt like you were given a generous amount of free tries and I barely ever had to spend money. However, some of the badge catchers were laid out in such a way, that you couldn’t hope to get certain badges without paying, which did get frustrating sometimes.

But, overall, I loved Nintendo Badge Arcade and consider it a very nice addition to the 3DS library.  There are some really great, unique pieces of artwork to be unlocked and you can then use it to make your home menu screen a lot more personal – I wouldn’t have been able to turn mine into a little Donkey Kong shrine without it. Be sure to play it while they’re still cycling through the old badges and before the service is discontinued.