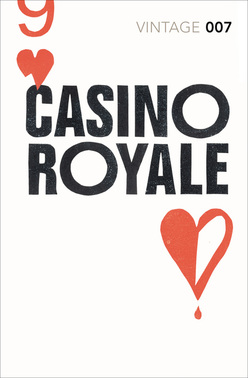 This novel introduced to the world the very popular character, James Bond. Of course, he’s not the only one; M and Felix Leiter both debut in this book and both would also go on to be prominent figures in the world of James Bond. Otherwise, though, this novel is quite removed from the thing people would usually think of in regards to James Bond.

The story starts with James being sent on a mission to go to a casino and bankrupt a gambler named Le Chiffre because he is known as a man who has been aiding the Russians for the (then current) Cold War. Of course, in between card games, James sneaks around secretly gathering information and whatnot too. Along the way, he is also aided by a woman named Vesper Lynd with whom he shares a degree of sexual tension with.

Sadly, none of this, for me, made for a particularly exciting story. The writing style is completely joyless, and James himself hardly provides any kind of emotional gateway into this gritty world of Cold War espionage. I found scenes of him chatting with villains while he plays baccarat to be plain boring. I will admit though, that things did begin to pick up towards the end of the book, perhaps around the final quarter, but I can’t really tell you how without spoiling the plot. Even once it has improved though, the shift is from boring to depressing, which is hardly the best way for a story to progress. So while you feel nothing but boredom for the first 75%, you’ll feel sad for the final 25% but, hey, at least you’re feeling something!

So while this novel is the book that gave the world James Bond, there really is very little to it, it’s actually one of my least favourite books. Don’t be put off though! Later books in the series are a lot better than this one. Rating: 5/10