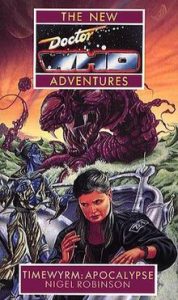 This is the third book in the Doctor Who New Adventures series as well as the third part of the Timewyrm story arc. Unfortunately, while I feel like things had been going quite well until this point, this installment felt a little bit like a misstep. The first one had been a solid start (even if a tad silly) the second one had been amazing, but this third one was just a bit boring.

The story goes that the Doctor and Ace arrive on the planet Kirith, which has an apparently utopian society. Naturally, something doesn’t quite seem right and so they investigate it to figure out what’s going on. It’s not a particularly exciting premise and it’s the kind of thing I can imagine as a filler episode in the main TV show.

The Doctor and Ace are both characterised very well and I feel like there is a significant moment in their relationship in this story. I can’t fault Nigel Robinson for that, because he gets them both just right and they were the main two things keeping me interested in the story. There were also a few flash backs to the Second Doctor, which I quite liked (in part, because he is my second favourite Doctor) and he was captured perfectly as well. The reason for his appearances, which I shan’t spoil, also add an interesting dimension to the story.

Having said that, I didn’t feel like any of the other characters (those who were specifically introduced for this story) were particularly interesting or memorable. They all just act like generic humanoid aliens from pulp sci-fi and have very little in the way of personality (according to my opinion, at very least.)

There were a few moments throughout, which were quite engaging. The ending was also pretty good, I guess. It’s just that, as a whole, I was never really drawn into this novel – and I’m saying that as a rabid Doctor Who fan. If you’ve only got a passing interest in the series, you’ll probably be even more bored than I was.

Nothing about it leapt out at me as terrible and nothing about it really annoyed me either. It just felt like a very average piece of science fiction, which just happened to feature the Doctor and Ace. If it weren’t part of the Timewyrm story arc (which is much better, on the whole) I’d say that it wasn’t worth reading.