Harry Potter and the Chamber of Secrets by J. K. Rowling 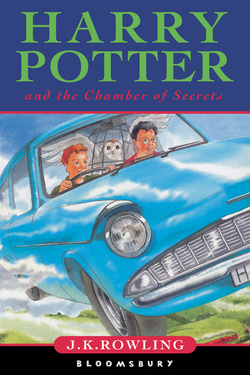 This is the second Harry Potter novel and it starts where the first one left off, with Harry home for the summer following his first year at Hogwarts. One day he gets a visit from a house elf named Dobby, who warns him that some very bad things will happen to him if he returns for his second year. Once Harry does get back, he begins to discover that there is indeed something strange going on at Hogwarts, once again!

I think this book is better than the first, in part due to the addition of several excellent characters. First, there’s Ron’s younger sister Ginny who has a little bit of a crush on Harry. While she isn’t in all that many scenes, it’s always lovely when she is, because she’s so nice and sweet. Second, there’s the school’s new Defence Against the Dark Arts teacher: Gilderoy Lockhart. He’s a very over the top man and he has quite a high opinion of himself too. All the main characters (other than Hermione) find him very annoying, but I found him to be hilarious and loveable. Finally, there’s Dobby. Dobby is a house elf which means that he is a slave to a certain family and he worries constantly about doing things that will upset them. Like Ginny, he’s not in many scenes, but he’s still an adorable addition to the story.

Another upside of this story is that it gives you a bit of a look at the history of Hogwarts. I don’t want to spoil any crucial part, but there’s a flashback to the school fifty years in the past which was a very good bit. As well as that, characters also discuss the original founders of Hogwarts who lived thousands of years ago, which works well to make the magical world feel more developed.

On the whole, this does all the good things the first book does and adds several more good things too! I found that this one was much funnier at times, that it had a lot more emotional depths than the first and that it was even slightly creepy too.