How the Grinch Stole Christmas! by Dr. Seuss 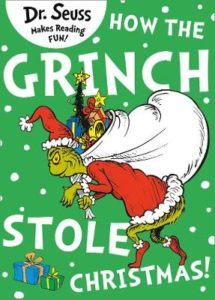 I’m a big Christmas fan and I really love all of the classic stories associated with the season, such as Earl Hamner’s The Homecoming and Charles Dickens’ A Christmas Carol, but there’d always been on conspicuous gap in my Christmas appreciation: the Grinch.

Now, like many of you, I was already familiar with the general story of How the Grinch Stole Christmas! which is that of a negative person who steals people’s Christmas presents to stop them from being able to enjoy Christmas, but what I didn’t know was that there’s a fair bit of depth to it all.

What the Grinch hates about Christmas is the fact that it’s all so loud and people are all so over the top about it. It annoys him and he just wants to sit quietly in his cave. The fact is, he doesn’t truly understand what Christmas is. To him, it is simply a day for over indulgence and I can understand why he would take issue with it.

But when the Grinch realises that the thing that’s important to people is being together and they’re not really bothered about all of the trappings, he changes his perspective. He sees the good in humanity (or in the Whos of Whoville, which are the creatures in this story) and he wants to be a part of it. When he gets that its about love and not excessive consumption, it elicits some change in him.

It’s a simple story, but I think it’s quite a beautiful one. The Grinch lives by himself and is, presumably, very lonely. He doesn’t understand people and there reasons for doing things, simply because he does not understand them. Sure, stealing everybody’s Christmas presents is a bad thing to do, but when people hate, they do so only out of ignorance and it’s definitely true of the Grinch. Loneliness always brings out the worst in people, but when he gets a chance to be a part of community again, he cannot resist.

All I knew of the Grinch was that he was a villainous character who stole presents from people. I thought it might be a fun little Christmas romp – and it was, but the additional layer of significant meaning was greatly appreciated. And, of course, it’s all wrapped up in the beautiful bow that is Dr. Seuss’s usual lyrical writing style. If you’ve not read it, I strongly recommend it!