The Hitchhiker’s Guide to the Galaxy by Douglas Adams 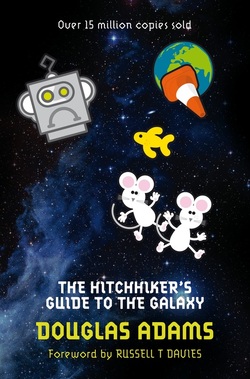 When people think of a comedy sci-fi novel, they almost certainly think of The Hitchhiker’s Guide to the Galaxy and for good reason: this is a very good book! Having said that, I think that it is a bit of an injustice to think of it like that, mostly because I feel like the whole genre of comedy is unfairly considered as somehow lesser or worthless, two things which I would never describe The Hitchhiker’s Guide to the Galaxy as.

The story follows the adventures of a rather unfortunate man named Arthur Dent and his unusual friend Ford Prefect. Arthur starts his day by finding that his home is due to be demolished in order to make way for a new highway and ,of course, he is rather upset about this and does all he can to stop it from happening. After this, he gets some even worse news: that the world is going to end before the day is over.

I shan’t say any more about the plot as it’s probably best to experience this novel with as little foreknowledge of the plot as possible. What I will say is that this book makes for a very pleasant read, from start to finish there’s a mixture of everyday life with things that are completely fantastical and it makes for a lovely blend. What I also like is that there are a lot of aspects to the novel which are completely absurd, but they are taken completely seriously; this, along with numerous anecdotes about the larger universe that this story takes place in, really helps you to appreciate the world that Douglas Adams has created.

So this is a book that I recommend very highly. I guess the only real downside to it is that it’s ending is a bit underwhelming and just seems to be setting up the sequel. Other than that, this is an excellently structured novel, full of small references that may seem odd at first but later lead to very satisfactory pay offs and other clever things like that.