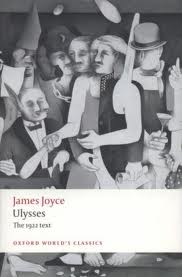 Ulysses is a rather long book (732 pages in my edition) which covers a single day in Dublin from the points of view of various characters. It often finds itself on large ‘read these before you die’ lists and gets called the greatest novel of the twentieth century.

However, I disagree. I love reading, I really do, not to boast, but I’ve read lots of books from many different eras and enjoyed all of them quite a lot. Ulysses is the first book I’ve which I would call boring, or not particularly good. Throughout the book, Joyce writes in a very unique writing style and, while I do like writers to have their own style, I find Joyce’s one is just irritating. He tries to blend stream of consciousness into regular third person narration and so you’ll often be distracted from what’s happening in a scene by some strange uninteresting tangent. This makes it really hard to follow, and I must admit that, at times, I literally had no idea what was going on. Plus, there are odd changes too, one chapter is a script, another is a set of questions and answers and I struggled to see the point of it (though it does at least provide a little variation.)

Furthermore, the book seems to be filled with random literary allusions all the way through. In the middle of reading, you’ll randomly find a small piece about The Bible, or Dante, or Aristotle, or Shakespeare… While it may sometimes be enjoyable when you suddenly ‘get’ a very subtle reference, it just makes you wonder why it was even put there. It seems he was just fitting in all of these references for the sake of it. Having said that, there is one bit where the characters discuss Shakespeare which I actually enjoyed a little bit.

There are other good bits too: there’s a long monologue by a character named Molly at the end and it’s probably the best part. He also invented the word ‘Sherlock Holmesing’ for when you try and induce things about people based on things you can see on them, and there are just other odd lines and paragraphs which are pretty enjoyable too.