Fury Thy Name is Woman by Ben Wood

Posted on July 15, 2013 by Adam Randall
(This week on my blog I am posting an entry every day, and each entry will be written by somebody other than me. Today’s entry is an anecdote written by Ben Wood (a friend of mine I’ve know for about seven years). Enjoy!) 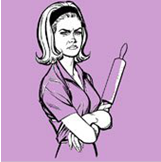 As you can probably assume from the title, this anecdote is about women and anger. Firstly, though this is in no way meant to be offensive or sexist, it could be considered to be by those who are easily offend, so if you are easily offended you have been warned!

Firstly some background information to this anecdote, several weeks ago my girlfriend, as part of her University course, had an interview for a placement year in Middlesex. Since we live in Wiltshire I offered to drive her to the interview, with the help of a Sat-Nav, so she would have one less thing to worry about.

Now my Sat-Nav is quite a few years old so it’s not fully up-to-date with some of the new roadwork changes, for example the Sat-Nav didn’t know about a fairly recent road that lead into a tunnel underneath a hill and decided to yell at me, in its female voice, until I was ‘back on route’.

So now we begin the actual anecdote, yay! While driving along, my Sat-Nav was nagging me the majority of the way in its derogatory female robotic voice, which was eating away at me inside. Especially because it believed I was driving through fields and rivers when in fact I was on fairly recently built roads. Anyway after about seventy-seven miles worth of unneeded criticisms and “recalculating routes” we arrived in Middlesex. We decided to pop into the local supermarket for some lunch, since I do love a nice meal deal. To be honest I was just happy to be out the car and away from the Sat-Nav nagging me. Whilst paying for the meal deals in the self-checkout machine area, my girlfriend lovingly nagged me to tell me to “quickly, put the food in the bagging, otherwise it’ll nag you to do it!” which was immediately followed by the checkout machine nagging me, in its female robotic voice, to “place items in the bagging area” to which my girlfriend replied “See! I told you!” she seemed not to notice the irony of nagging me so that I wouldn’t get nagged.

So, after a day of being nagged from a variety of female/robotic voices I half-jokingly said to my girlfriend, “No wonder they use female voices for all these machines! All they do is nag you!”. My girlfriend was not amused, and as I learnt when I immediately turned round, neither were all the other women who dominated the supermarket. I tell you, the looks those women gave me could have turned me to stone! So I walked out of the supermarket with my tail nicely tucked between my legs before any of the women could nag me further! Ha!

But I suppose in all seriousness, if there were to be a moral to this anecdote, it would be that they should REALLY change the voices on the talking machines nowadays! Instead of a critical female voice why not have a celebrity voice on the self-checkout. I would MUCH prefer and enjoy Samuel L. Jackson Saying “PUT THE MOTHERF***ING ITEMS IN THE MOTHERF***ING BAGGING AREA NOW MOTHERF***ER!!!!” every time I buy a lovely meal deal.

What do you think Samuel L. Jackson? 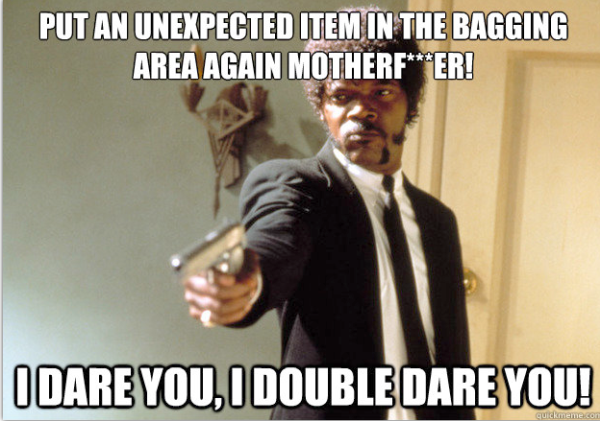 This entry was posted in Guest Posts. Bookmark the permalink.