Earlier this year, I started making arrangements for my birthday party. Rather sillyly I got a little over excited and started planning to see all of my friends when, really, very few of them could make it. Among the people I invited was my friend Mairi Mac Arthur (who, at the time lived in London, about an hour’s train ride away) and while she was initially due to come, work commitments came up at the last moment and she had to cancel. Which was sad.

What wasn’t sad, however, was the fact that she sent me a very nice gift in the mail which arrived the day after (I think). This gift was a TARDIS shaped notebook which I liked a lot and decided to turn into my Compliment Book. Essentially, what I do is write down every nice thing that is said to me which makes me especially happy; I don’t write down every nice thing, just things which touch me in a certain way (it’s hard to explain).

So, since April I’ve been keeping my compliment book and I advise anyone who’s reading it to do the same! I regret waiting so long before making this idea a reality (because, obviously, I’ve forgotten some things I would have liked to note down). Here are a couple of pictures (I’ve had to blur some people’s names). 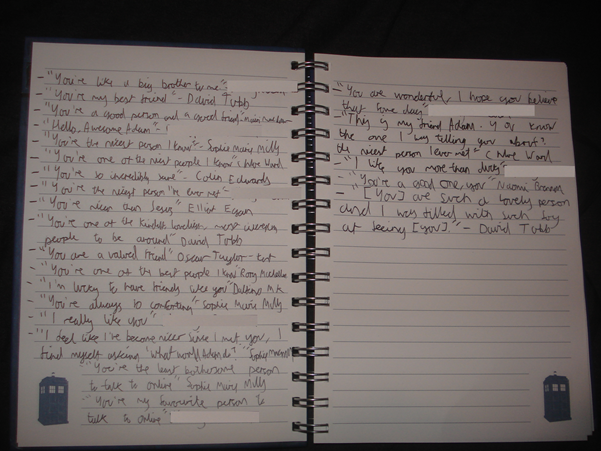 Perhaps it may seem a bit egotistical of me to make something like that, but I do it as a form of reassurance. If I feel sad about something, a quick look in here is likely to cheer me up and it’s quite nice that that means people are able to cheer me up with something they said ages ago and may not even remember. In years to come, I can only imagine I’ll value this even more. So, start your own there are countless times when this has been a cure for sadness for me!

This entry was posted in Lovely Things, Thoughts, Writing. Bookmark the permalink.