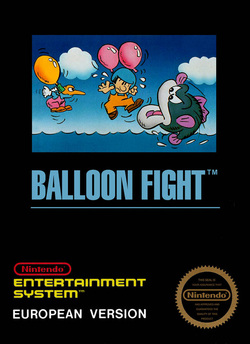 Balloon Fight is a game where you take control of a man who is attached to a couple of balloons which he uses to fly, and then fight birds who are also flying around on balloons. It’s pretty basic, but nice and fun. There are three different game modes.

The first is the one player game. In this you find yourself in one of several stages. These stages all take up the space of a single screen and you can only move left, right, up or down, they are not three dimensional. Every level will have a certain amount of enemy birds to fight and to defeat them you have to fly over them and pop their balloons, which will cause them to fall to the ground, and then you have to bump into them again, which will knock them into the water at the bottom of the stage. As well as the birds, you also have to dodge bolts of lightning (which will kill you instantly) and a large fish which jumps out of the water in order to try and eat you. These levels go on forever and you are just playing to get a high score, rather than towards any goal. I find it pretty enjoyable.

The second mode is the two player game. This is identical to the one player game, except a second player takes control over a second balloon fighter. Unlike a lot of NES games, when you play multiplayer, both of you are playing simultaneously, rather than alternately, which makes things even more fun. The multiplayer mode adds more variety; you can choose to help one another defeat the birds, or you can choose to treat each other as another enemy and fight each other while fighting the birds. This is definitely my favourite of all the modes.

Finally, there is a mode called Balloon Trip. Here you are put in an infinitely long side-scrolling level where you have to dodge hundreds of little sparks (which will kill you instantly) and the goal is basically just to see how far you can get. This mode is both very frustrating and very addictive. You can be doing really, really well but then one slip and you’re dead, so you’ll try again and again always trying to outdo yourself.

On the whole, the game is good for what it is, but what it is isn’t much, if that makes sense? It’s more enjoyable than a lot of other early NES games.