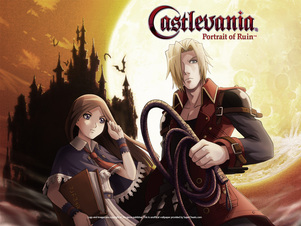 In this instalment in the Castlevania series you take control of Jonathan Morris and Charlotte Aulin as they explore Dracula’s castle, which is now inhabited by a new evil vampire named Brauner.

While it is only a 2D game, Dracula’s castle is huge and you’ll spend a long time exploring it. The castle has all the usual things you’d expect: creepy old corridors full of skeletons, dungeons full of monsters and ghosts, waterways full of mermen, but as well as all that there’re paintings which are portals to other worlds. The painting worlds include an Ancient Egypt-type desert, a giant creepy circus, an abandoned village and other interesting places to visit too, all of which are also pretty big (but not as big as Dracula’s castle itself).

The fact that you can be both Jonathan and Charlotte is something I quite liked. Jonathan is more of a power type character, while Charlotte mainly uses magic, so you can switch between them at any point in the game and use the one that you think best suits whatever it is that you’re doing. You can also choose between having just one on screen at a time, or having the other character controlled by the computer: an option which can come in very handy during some boss fights.

Outside of the main game, there are a few other things you can do. For example, you can open up an online shop and sell several of the various items you’ve found throughout the game (and there are literally hundreds of things to collect). I thought this was a lovely little feature, as it made everything feel kind of connected, but the downside is that customers barely ever came, which did reduce my motivation to maintain it. There’s also a mode where you have to fight through loads of enemies in as short a space as time as you can in order to win items which you can use in the main story. You can also play this mode with a friend, which is a nice addition, but one that you probably won’t get to experience because both players need both a DS and a copy of the game.

On the whole, this game presents an excellent adventure which wonderfully uses some classic horror tropes, is packed with references to classical mythology and literature and, at the same time, is very fun.