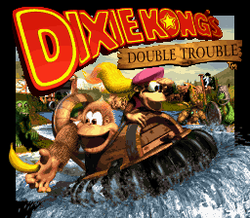 This game is the third in the Donkey Kong Country series (here’s a link to reviews of the first and second) and I find it to be yet another fantastic game.

The storyline this time is that Donkey Kong and Diddy have both mysteriously vanished and so Dixie (along with Kiddy, who she’s babysitting) head out to try and find them. As with the others, the storyline is relatively minor, but that doesn’t make the game any less wonderful. There is also an extra side to the story, but this only really comes up secretly (and you have to do a lot to earn it) so I shan’t spoil it.

The gameplay this time is very similar to the other two games, but that is definitely not a downside. While things are still just as good as last time, there’re still lots of nice additions too: Ellie the Elephant is a new animal buddy who brings with her some interesting new abilities, there’s another named Parry the Parallel Bird who is very small and weak and so you have to try hard to keep him alive for extra rewards. There’s also a level that is completely unlike anything else in the series up until this point, but it’s quite secret so I’ll leave you to discover it! One slight downside, though, is the sad absence of Rambi the Rhino.

What’s quite interesting, I find, is that the tone of the game is different to that of the first and second (much as they are both different from each other). The second felt darker to the first, with much of the world and characters looking generally grimmer and this game seems to have gone in the opposite direction: everything is much more brightly coloured and the characters seem much more cartoon-y than they do in other games. I say this, not as a criticism, merely as an observation. Everything still looks extremely beautiful (much as before) and is accompanied with immersive music.

What is also a high point of this game is the fact that now, rather than a basic map, what you walk around on between levels is much more of an overworld with its own hidden secrets. Plus, there are a lot more side quests involving the NPCs and just generally a larger number of additional tasks and secrets to find.

On the whole, a fantastic game, but I do feel it was a come down after the second. Rating: 9.6/10