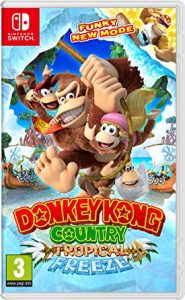 Since the Wii U was a bit of a failure, it seems like a lot of the games which were originally exclusive to it have jumped onto the life raft that is the Nintendo Switch in order to extend their life spans and to reach more people. Donkey Kong Country: Tropical Freeze was one of the best games on the Wii U and it’s now also one of the best games on the Switch. If you’re thinking about buying it, please do read my earlier review before I go over the benefits of this version.

The biggest and most marketed addition is that you can now play as Funky Kong (and for the first time in a Donkey Kong Country game!) who is much more capable than the other Kongs. He uses his surf board to stand on spiky surfaces and, to do double jumps and to slowly float downward from his jumps. He uses a snorkel so that he can breath under water, can roll infinitely and can take five hits. Some people say that he makes the game boring, but I find him really fun to play as. It’s great to be able to speed through the game’s hard levels and I think that Funky might be a good choice for those who are new to the series (as the game can be quite hard for newcomers.)

Funky may not seem like much, but after beating the final boss in Original Mode, I started a new file on “Funky Mode” and felt that going through as him was a fun and different experience. There are lots of small little extras too. Donkey Kong will now play with a Nintendo Switch in his idle animation. Levels now load more quickly. A new character called Tawks (a cool parrot) replaces Funky as shopkeeper when you play as him. (I hope we see Tawks again in the future.) In Funky Mode, players now have the option to play as Donkey, Diddy, Dixie and Cranky, but with extra hearts. Finally, the song used in the credits has been replaced with a new song – I like both equally, but it’s always good to get more David Wise music.

The improvements are small, but I say that this is definitely still worth buying if you have the original and, if you don’t, then this is a great way to play the game for the first time. Honestly, it’s better than the original. Oh, also, Donkey Kong’s nose has been redesigned for some reason and I’ve seen people who are angry about that. I have not feelings about that subject. #DonkeyKongsNoseDonkeyKongsRules