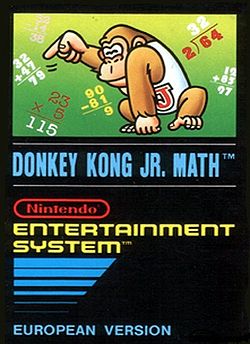 Back in the early days of the NES, Nintendo decided that it could be a good idea to try and make some educational games. Donkey Kong Jr. Math was the first of these, but it was so unpopular that they decided not to make any more. I think this is quite a shame, really, since I find this game to be pretty fun, so who knows what the other planned games would have been like?

There are two games modes in this, single player and multiplayer, and I’ll admit that the single player mode is boring and not at all fun. Basically, Donkey Kong has a maths question and you, as Donkey Kong Jr. have to answer it for him. That’s it. There are different modes for this question answering, but, really, they’re all the same thing. So, unless you have somebody else who’ll play with you, don’t buy this game.

The multiplayer mode is, for me, what makes this game very fun and worth buying. In this player one controls Donkey Kong Jr. and player two controls another, pink Donkey Kong Jr. Donkey Kong holds up a board with a number on it and, the winner is whoever ‘gets’ that number first. Scattered about the 2D stage are several numbers from one to nine and several binary operators (plus signs, minus signs, division signs and multiplication signs) and so, if Donkey Kong’s number was thirty, you could get an, eight, then a plus, then a two, which would give you ten, then you’d get a multiplication sign and get three, which would give you the number he wants. Of course, that’s just a very basic example and it will normally be a number that you have to think a lot harder to get, but you get the idea. When playing against somebody else, it’s a real hurry to get the things you want and, when you win, it feels better than just winning a Mario Kart race (for example) because you’ve had to actually apply your mind to win.

So, basically, this game is made up of a missable single player mode and a terribly fun multiplayer game that you can play for hours. It’s certainly not perfect, but I suggest giving it a try.