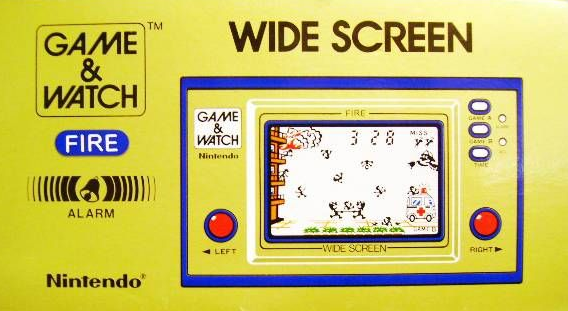 Fire is one of the earlier Game & Watches and it is also one of the most iconic and the most fun. Quite significantly, the generic people in this game are what would be used as the basis for the character Mr. Game & Watch.

Like all Game & Watches, this is quite a simple game, but it’s pretty fun. In it, a block of flats are on fire and people are jumping out of the windows to escape the flames. You play as a pair of firemen who are holding a trampoline in order to break the falls of the jumpers. When somebody lands on the trampoline, they are launched back into the air and you have to get ready to catch them again. After the third bounce on the trampoline they land in an ambulance. At first only a small number of people jump out and they don’t go to fast, but over time the number and the speed goes up. Every time you let somebody hit the ground you lose a life and after this happens three times it’s game over.

It’s fun to play over and over again to see how high a score you can achieve. When you’re really into it and bouncing loads of people into the ambulance it feels really good. Like all Game & Watches, there’s also a hard mode where people jump from different levels of the building and don’t jump as soon as they appear. It’s fun to come back to quite often.