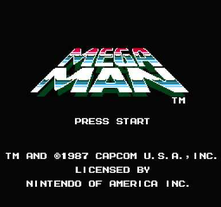 The Mega Man series is one of the most iconic in the world of gaming and the several Mega Man games that appeared on the NES are remembered as some of the best titles on the console. This, of course, is the game that started it all. But does this game live up to the reputation of the series it spawned?

A big thing that will affect your enjoyment is its difficulty. I am not ashamed to say that I made heavy use of save states when I played through it; it would take you a very, very long time to get good enough to win at this game without the aid of save states… Unless I am just a terrible gamer. So, if you don’t appreciate tough games, this might not be for you. I have to admit though, that while it did get frustrating sometimes, I also sometimes found myself laughing at it; the level design was just hilariously obnoxious at certain points.

The game is made up of several 2D side-scrolling stages which involve a combination of platforming and shooting enemies. What’s quite interesting is that, other than the first and last stages, you can play through all of the game’s levels in whatever order you want. Each level has a Robot Master in it who acts as a boss; each Robot Master you defeat will leave behind a power-up which you can use to give Mega Man a new ability/power; this is pretty handy since without any of them he is not exactly mega! I always looked forward to acquiring the new abilities. Back onto the subject of difficulty: every level is full of very hard to dodge enemies and projectiles which fly all over the screen and since Mega Man isn’t very mobile, things always feel very unfair.

In the end, it’s quite hard for me to say how I felt about this game: it’s very unfair and has a cheap level of difficulty. However, I was amused with how hard the game was; do I like it because it’s bad? Maybe. But maybe that’s how you were supposed to enjoy it? Also, I was legitimately frustrated and annoyed with the game at times (especially one boss battle near the end) and that’s not in its favour. It had very nice music on some of it’s levels: some of the best 8-bit tracks I have ever heard. It’s a mixture of feelings, good and bad, so please take my final score with a grain of salt.

(Sorry for the delay with this blog post, it was supposed to go up yesterday, but was prevented from doing so by a technological error.)