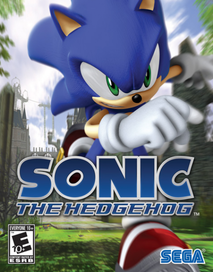 A part of what people don’t like about this game is its story. The game centres around Eggman’s kidnapping of Elise, the princess of a fictional location called Soleanna. There are three story paths; one follows Sonic as he directly attempts to stop Eggman and save Princess Elise, another follows Shadow who knows much more about what is going on and the other follows Silver, a mysterious hedgehog from the future. One of the most commonly criticised aspects of the story is that a romance appears to bloom between Sonic and Elise; people hate this because Sonic is an anthropomorphic hedgehog and Elise is a human being. To be honest, this doesn’t bother me because they’re both rational and consenting, so I see no problem in that respect. I do, however, see a problem with Elise receiving little to know actual character development, basically being nothing more than a damsel in distress and seeming to develop feelings for Sonic instantaneously (and vice versa).

But the story’s not the thing people dislike most about this game; it’s the gameplay. There are nine playable characters: Sonic, Tails, Knuckles, Shadow, Rouge, Omega, Silver, Blaze and Amy. While it is nice that you get to play as so many different people, it’s also a shame that each and every one of them has a huge flaw in how they play. Sonic, for example, regularly has these Mach Speed segments where he runs so fast that he can’t stop and touching any obstacle will cause you harm. The Mach Speed sections are dreadful and I’d probably go so far as to call them the worst things in the game because it is incredibly difficult to control him at these times and they always come at the end of a level. Imagine you’ve spent twenty minutes getting through a tough level; it could all turn out to have been a waste of time within a few seconds when you are unfairly killed during a Mach Speed section. That’s the worst of it, but there are so many more issues; Tails’s only means of attack is throwing these weird ring bombs (and the camera goes strange every time you use them), Knuckles can climb on walls, but can actually get stuck to them, Silver can only attack using an awkward telekinesis method… That’s not to mention that controls never feel quite right, everything feels a bit slow and on certain levels it’s not even clear where you need to go.

Despite everything I just mentioned though, I still had a fairly good time with it. Sure, the story was just kind of bad, but I felt like that, had this game not been rushed through development (and it so obviously was, at one point a voice actor misreads a line, and the character speaks both takes!) it could actually have been quite fun. Certain parts (of certain levels) were actually quite fun and all of the levels at least looked very pretty (though speaking of looks, they gave Eggman a new, weird design). The game’s soundtrack is also exceptional and, in my opinion, the best I’ve heard from a Sonic game. I mean, I don’t want to go too far, Sonic 06 isn’t exactly good and at times it can be extremely frustrating, but it does have its qualities and I am glad I played it… Maybe don’t try it as your first Sonic game though.