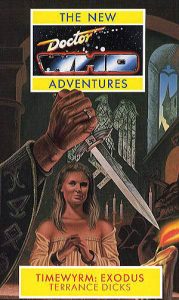 When Doctor Who was cancelled on television, it came back in the form of a series of novels, the first four of which made up the Timewyrm series. What’s quite exciting about this one is that it was written by Terrance Dicks, who is one of the best known and highly regarded of the writers who worked on the show during it’s original run (and beyond.)

I do think that the series was off to a good start with the previous book Timewyrm: Geneysis, but this book really managed to blow it out of the water. The first book had a lot of sex and violence, things which I am not necessarily opposed to being used in Doctor Who but which were handled in a somewhat immature manner and in a way that didn’t feel quite true to the show.

Nothing in Timewyrm: Exodus felt as if it wasn’t true to the show. Having said that, I also wouldn’t like to say it was just like something that could have happened in the series. The book does contain some very adult themes, but they’re mixed perfectly with the Doctor Who ethos, creating an impressive ambience between the two.

So what’s the storyline? Well, the Doctor and Ace arrive in London in 1951, but small things alert them to the fact that something is not right. They soon realise that history has now been changed so that the Nazis won World War 2 and conquered the UK. The Doctor then starts to investigate where exactly the timeline diverged and then set about trying to get it back on track – using time travel, of course.

Something that I appreciated was the attention to historical detail. All of the references to real life happenings (and the ways that they were changed in the new timeline) were really interesting. Alternative History is a genre I’m very fond of and though “What if the Nazis won the Second World War?” is a commonly asked question, the answer that this book provides is very enjoyable and thought-provoking.

What makes the book even better (for big fans of the show) is that it has strong ties to some of the earlier mythos of the show. I’d hate to say what happens, because I was very pleasantly surprised when I came across it naturally and I’d not want to rob anyone of that experience, but it was very cool. Although it might be lost on more casual fans of the show.

Overall, I kind of feel that Timewyrm: Exodus should have been the first book in the series, because it’s a really interesting and exciting story. I found myself reading multiple chapters at a time because it was, as they say, hard to put down. Even if you’ve not read the first book, the connections to it are relatively small, so you might want to give this a read. I’d say that it is one of the best Doctor Who novels I’ve ever read, fans should definitely give it a try, if they can find a copy.