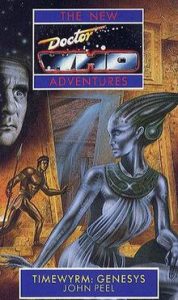 When Doctor Who was cancelled in 1989, there was international turmoil. Nobody could accept that what might possibly be the best television programme ever made had just been taken off the air. It pushed the tensions of the Cold War to the extreme as more and more people adopted the stance of “Life is no longer worth living, so we may as well all be blown up.” Naturally, there was only one solution: to bring back Doctor Who, but it returned in the form of a novel series…

Anyway, enough of being silly – Timewrym: Genesys is the start of a long series of Doctor Who novels which continue the adventures of the Seventh Doctor and his companion Ace after the ending of the final TV story. A lot of people were disappointed that the series was cancelled when it was, because it had started to adopt a more serious tone and had included a stronger focus on character development.

The good news is that this shift of tone continues. I felt like Ace in particular was characterised well in this book. We get to find out how she feels about travelling with the Doctor – both the good and the bad. The insights into her mind that this book provides, make her feel even more real and likeable. She was definitely the point of connection for this book. But, really, pretty much every character in this book was really well defined and I think it’s a definitive strength.

The bad news is that it kind of goes too far in some respects. The story has the Doctor getting involved with characters from The Epic of Gilgamesh as well as setting up a new villain. This is all fine – but they used the historical setting as an excuse to go a bit over the top with the sex and violence. I guess John Peel just got carried away by the idea of writing Doctor Who without constraints.

People have their entrails cut out all the time, a teenage prostitute spends a lot of the time walking around topless (with attention drawn to her breasts a large amount of the time) and even Ace has a couple of nude scenes which felt quite awkward and out of place. The Doctor is also particularly cold and uncaring – for example, pressuring Ace to spend time alone with a known, armed rapist and then getting annoyed with her when she doesn’t want to, because it would ruin his plans. All of it feels like a conscious attempt to make the story be “adult.”

But other than the Doctor’s behaviour and the silly levels of sex and gore, I still consider this a good book. As well as the great character development, I was also quite pleased with all the fan service. There are quite a few references to old Doctor Who stories and a few small cameos which probably wouldn’t have been done on television. I think if you’re a fan of the show, you should give it a try as it’s a well told story if you ignore the flaws.