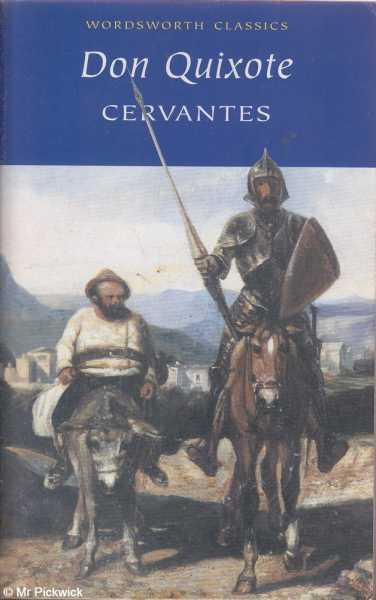 Don Quixote, often called the first modern novel, is something that should really be looked at as two separate novels, rather than one. Both novels are always published together these days and, as such, I will review them together, but you must bear in mind that they are two distinct books…

The first book sets the scene for the whole thing: Don Quixote goes insane from reading too many books about chivalric knights and decides to head out (along with his squire, Sancho Panza) believing that he is one too. It all starts out very silly really, with him doing things such as attacking windmills because he thinks they’re giants, but it is still entertaining nonetheless, I just feel that it could do with a touch more seriousness. The main problem with the first book, though, is the fact that there are several times when you’re taken away from the main narrative to hear about a story which is irrelevant to the main sequence of events. The worst case of these distractions is when a character stops to read a book, and the whole book is written out for you to read too… It was very off putting for me, not least of all because the book they read is very boring. On the whole, while the first part isn’t bad by any means, it’s not utterly amazing either, so I give it a 6/10.

The second book, for me, is when the story of Don Quixote really gets going! There is quite a change actually, between the first and the second book, and that is the publication of the first (if that makes sense?). Basically, Don Quixote and Sancho Panza meet several people who know them because they’ve read all of their adventures in the first book. What I especially like, is the fact that there are no longer any huge distractions from the main storyline, and, the funny thing is, that one character even criticises the chapters that did so in the previous book. The secondary characters who you meet in part 2 are a lot better than those you meet in part 1 and, indeed, there is even an added element of seriousness which was lacking in the first one too. On the whole, this one is quite a lot better, so I’d give it 8/10

So that’s quite a nice average score of 7/10 should you plan to read them back to back (as I did!)