Ethics by Aristotle (translated by J. A. K. Thomson) 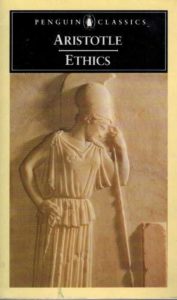 Aristotle was the student of Plato, who was the student of Socrates and I feel that the knowledge and wisdom had really refined itself by the time it got to Aristotle. By all means, they all have a lot of beliefs which seem kind of strange to me and are likely to seem strange to any twenty-first century person – but I feel as though Aristotle’s are the most level headed and there was a lot of interesting stuff in this book.

The core principle of Aristotle’s ethics is that to do the right thing, one must find the “Golden Mean.” What this means, is that a person’s temperament (or response to any given situation) can become a vice either due to an excess of certain qualities, or a deficiency. So, for example, one person might flee from danger in cowardice, another might fling themselves foolhardily into danger and the Golden Mean response will be to remain calm and reduce the threat to yourself and others. Or a person might be really selfish and never do anything for anyone, while another will be selfless to the point of self-destruction – but the Golden Mean would be to be selfless, but to be aware of your limits in the process.

Most of the book is spent illustrating how the Golden Mean applies to many different cases and while it can be interesting at times, I did also think that some of it was a bit… obvious. But perhaps that’s because I’m standing on the shoulders of giants. Perhaps these concepts would have seemed more mind blowing over two thousand years ago. Some of his points I didn’t quite like either; for example, he claims that someone doesn’t have full responsibility for actions committed under the influence of lust, as they aren’t thinking clearly. Whether intended or not, this makes him sound like a bit of a rape apologist. Though it’s understandable considering the time, Aristotle’s ethics and his way of talking about self-harm and self-love really fail to take a person’s mental health into consideration in any way that is properly reflective of how mental health actually works.

The fact that this was written two thousand years ago does show throughout – sometimes in very interesting ways. He refers to ‘the gods’ many times without even the shadow of a doubt about their existence and he’ll make references to contemporaries to make points and, according to the foot notes, the identity of some of the people he refers to has been long forgotten – which I find fascinating. Their only legacy in the modern world is a passing reference in a work by somebody else. It’s also nice to see his polite rebuttal of Plato – his arguments against the Form of the Good were agreeable, as he argues ethics need to adapt based on circumstances, rather than being absolute.

The biggest flaw is the fact that this is very dry. I found that if I read for more than five or ten minutes, it all stopped making sense to me. Perhaps that says more about me than the book. Thankfully, it’s divided into several easy to digest little sections (about a page or so in length) and I ended up reading one of these a day. I don’t know if I can recommend this book to the general reader, but if you’re passionate about the ancient Greeks or moral philosophy, then you may enjoy it.