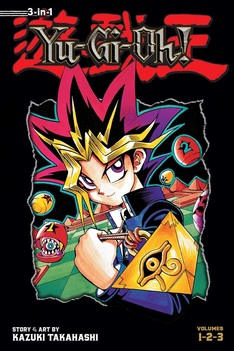 I’m sure most of you probably know of the Yu-Gi-Oh! franchise in some form or another. Maybe you’ve heard of the popular trading card game, one of the anime series or one of the many video games. But it was the manga that started it all and, I have to say, a very good manga it is too.

The story follows a young boy named Yugi. He’s a sweet high school kid who’s fond of doing puzzles. He’s not a very popular boy and is regularly bullied at school. He does have one friend though, a girl named Anzu and she and Yugi are probably my two favourite characters as they’re both very nice and reasonable. They make another friend fairly early on, Jonouchi, but he’s quite foolhardy and I didn’t warm to him quite as much.

Yugi’s grandfather works in a shop which sells old puzzles, and one of the things he has there is the ancient Millennium Puzzle. The Millennium Puzzle has gone unsolved for centuries, but when Yugi tries his hand at it he’s able to complete it and completing it has some mysterious consequences; Yugi, in times of danger, adopts a new personality ‘Dark Yugi’ who initiates dark and twisted games with those who would harm him or his friends.

What I quite like about these first three volumes is the way that the tone changes very often; one moment there’ll be a chapter about the characters all playing a virtual pet game, the next they’ll be caught up in a deadly serious armed robbery. In a way, I suppose that’s a good way to show that these people are just kids after all and while horrible things may happen to them, they also maintain their childhood perspective on the world.

When Yugi is under the influence of the Millennium Puzzle, I was often shocked by his actions. The things he does to people are often fates worse than death, but sometimes they are just death and the fact that the victims are often teenagers makes it all very unsettling (despite how mean some of them may be.)

I suppose I’ve not spoken that much about what actually happens in this collection, but it’s quite hard to talk about the big plot details without spoiling them. Nonetheless, I very much enjoyed reading this; it was my first taste of Yu-Gi-Oh! and it’s certainly left me hungry for more.