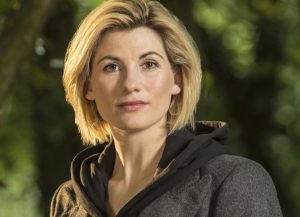 On Sunday, they announced that the Thirteenth Doctor will be played by Jodie Whittaker. This will make her the first Doctor (in the main canon) to be female. This, of course, has provoked lots of responses from the Doctor Who fan community and as I am a part of that community, I felt like I should weigh in with my own perspective on the new Doctor and my perspective of other fan perspectives.

Firstly, my own thoughts: I love the idea of a female Doctor. However, while this news has excited me, I can’t imagine how much more excited I’d have been if the first I saw of her was when the Twelfth Doctor regenerates in the next story. Especially if I didn’t know that that was going to be the story in which he was going to regenerate. But unfortunately, these days they always announce all the big news ahead of the episodes. Alas.

Having said that, knowing that we’ll get the first female Doctor in the next series makes me a lot more excited for it than I was before. I liked the Twelfth Doctor very much (he was my favourite) so naturally I was quite sad that he was going. In fact, as some people had complained that he was too old, I was worried that they’d just go for a younger actor who would try to copy David Tennant or Matt Smith – knowing that we’ll be getting the first female Doctor has me a lot more excited as it will be new and different.

I’m delighted that the Doctor will finally be regenerating into a woman. This is because I like to view the Doctor as a genderless character and this cements that for me – anyone can play the Doctor, because the Doctor’s character is not attached to any the traits our culture attaches to different genders. Unlike a lot of iconic male characters, who are written as male characters, the Doctor never really is – his close platonic relationships with female friends are a nice example of that.  In the world of TV, where a person’s gender has a lot to say about their personality, it’s great to see one of my all-time favourite shows taking this progressive approach.

I do have one genuine concern, however. My concern is that everything I just said will not be the case and that the “personality” of this new Doctor will simply be that she is a woman. Each Doctor has a distinct personality and I don’t want her’s to be entirely based around being female. I’m worried about silly gender-based jokes, which will weaken her status as a progressive female role model (and cheapen the integrity of the show in general.) There’s so much potential for her to be a tremendous character and I can’t wait to see how it plays out. By all means have her dealing with sexism in different time zones, for example, just don’t make tasteless sex jokes.

It’s disappointing that so many people online have reacted negatively. I’ve seen people say that they refuse to watch the show once she takes other, while also claiming that their perspectives are not fuelled by sexism/prejudice when, in fact, deciding that she is bad before even watching her (simply based on gender) is a clear-cut case of prejudice. Others are going so far as to say that it “doesn’t make sense” which must be a stance taken by non-fans because within the lore and continuity of the series, it makes perfect sense. I can understand that some people might find it strange for a character they’ve always viewed as male to suddenly become female (my own views on gender are not very mainstream, after all) but I hope the more reasonable viewers will reserve their judgement until they’ve actually seen her in action and then hopefully she’ll do such a good job that she’ll win over lots of critics.

I’m very optimistic for the future of Doctor Who.