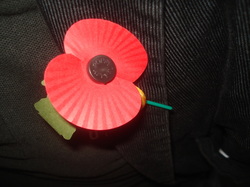 Just yesterday I bought my poppy for Remembrance Day. Some people might think of me as the kind of person who might not wear a poppy because I’m quite anti-military and an utter pacifist and the poppy is often used in a pro-militaristic context.

So why do I wear a poppy? Well, I wear it in memory of the millions of people who were murdered because of their governments. The poppy is an anti-war symbol as it is a reminder of the enormous loss of life which is inherently tied to war. The poppy is a way to pay tribute to those who had to live in extremely adverse conditions and had to do terrible, terrible things.

Really, I think it’s wrong that poppies are ever used as pro-military symbols. To use one in this respect, to me, seems to be to miss the point entirely. But, of course, having never been forced to live through anything so terrible, it’s not really for me to decide what it is that poppies stand for, but from my perspective, they’re the perfect thing to remind us that the price we pay for war is seldom justified.

This entry was posted in Thoughts. Bookmark the permalink.