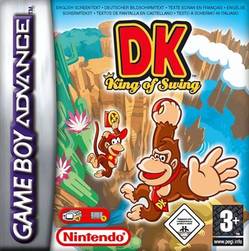 You know, before I properly start this review, there’s one thing I want to say about this game; doesn’t it seem really weird that it’s called DK: King of Swing and not Donkey Kong: King of Swing? I can’t imagine why they just decided to initialise our hero’s name. Not to complain, of course, but I’ve always found that strange.

The story line is pretty weak: The Kongs are getting ready for a jungle tournament, when King K. Rool comes along and steals all the medals (which they’ll be using as prizes) meaning that the whole event has to be cancelled. I know games like this are more focused on being fun than having an amazing story, but does that just seem a really pathetic evil plan?

Luckily, the game is nice and fun, so you can forgive the bad storyline. There are five worlds full of 2D levels to get through, but they aren’t just regular sidescrolling platformer stages. You need to climb upward through levels (using ‘pegs’ to grab hold of), avoiding enemies as you do so. This is nice because it’s quite unique and it means that some levels require quite a degree of skill, as the climbing can be quite difficult when you’re holding on to moving ‘pegs’. It’s all very enjoyable and it never gets too hard or frustrating. As with the original trilogy of Donkey Kong Country games, there are also a number of hidden items to find in each level, which adds to replayability. It’s just a shame there are only five worlds.

Outside of the ‘Adventure’ mode, there are also ‘Jungle Jam’ events you can play (‘Jungle Jam’ being the event K. Rool disrupted in the story mode). Here you can choose from climbing races, fights and games where you have to destroy barrels. These are quite fun, but nothing special. As a bonus, there are a selection of playable characters in this mode, including, Diddy, Dixie and Funky, with more to unlock as well, which is quite nice. This can be played in single or multiplayer, where, if you have a link cable, you can play the game against somebody else on their Game Boy Advance (and only using one copy of the game).

On the whole, it’s a nice attempt at experimentation and a welcome addition to the series. I found the soundtrack could be a bit boring, and it’s a shame that K. Rool has given up his thematic disguises, but these are small problems with what is otherwise a lovely little game.

(I now work for Smart Dating UK, don’t miss my first article for them!)