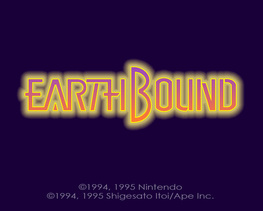 EarthBound is the second game in the Mother trilogy (in Japan it’s known as Mother 2). However, while all three games in the series are tied together, they also work perfectly as standalone titles and can be enjoyed to the fullest extent without knowledge of the others. This is rather fortunate because, very sadly, Mother and Mother 3 have only been made available in Japan (though fan translations do exist.)

The game is an RPG which follows the story of Ness (a character who is probably mainly only known through Super Smash Bros. and it’s sequels to players in the UK, since it only came out here in 2012!) who is just a regular child living in Eagleland (a fictionalised version of America). His adventure starts when a meteorite smashes down one night only a short distance away from his home in the small town of Onett. When he goes to investigate it, he receives a message from the future which warns him that an evil force called Giygas threatens all life on Earth unless he does something to stop it. He is given a ‘Sound Stone’ and needs to travel across the world to find eight mystical melodies to record on the stone which will help him to become powerful enough to vanquish Giygas.

Other than having a normal modern day setting (which is already a lovely twist), this might sound a bit like a generic RPG storyline, but this is absolutely not the case. This game is very unique and wonderfully weird. On his quest Ness will, amongst other things: get caught up in a religious cult, survive a zombie apocalypse, experience corrupt police brutality and even visit Stonehenge (which excites me, since in reality, it’s not too far from my home). Another big appeal of this game is its large cast of oddball characters; virtually every single person you meet will have something bizarre to say to you. My personal favourite encounter is with a doctor who restores your health simply by whispering “be healthy” into each of your ears, or perhaps it’s the monkey who says “I wanna become a pig” when you talk to it… There are countless examples.

However, while the game can be very humorous at times, it also has the capacity to deal with very dark subjects and is even quite creepy at times. In fact, I would go so far as to say that one of the moments in this game is one of the creepiest things I’ve ever experienced in a game! I wish I could go into details, but I don’t want to spoil anything; a lot of these things work just because of how unexpected they are. I should also add that the soundtrack always perfectly complements the tone of what is happening; you have fun and jolly songs and also very creepy and eerie pieces, all of them a pleasure to listen to.

I only have two small criticisms; the first is that it never feels like you have enough storage space for your items, which occasionally got frustrating. The second is that the game’s battle system can feel a little slow sometimes, which is mainly only a problem with small enemies, but still, it could have been faster. Otherwise, I am very happy with this game and will always consider it a favourite.