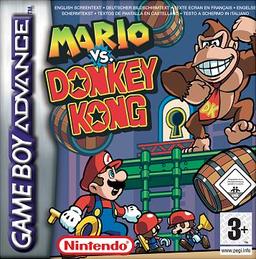 After Rare, who had been in charge of the Donkey Kong series for the better part of a decade, was purchased by Microsoft, it’s pretty clear that Nintendo wasn’t really sure what to do with the franchise. There were several rather experimental games, but then there was also Mario vs. Donkey Kong which was rather similar to the Game Boy game Donkey Kong.

What disappoints me is that this game has Donkey Kong adopt a more villainous role, which makes it feel like Nintendo were completely disregarding everything Rare did with the series. In the early Donkey Kong games, Donkey Kong was usually a villain (or, at best, morally ambiguous) while his son, Donkey Kong Jr., was portrayed more positively. When Rare took over, they reinvented Donkey Kong as a hero and explained that he was Donkey Kong Jr. all grown up (while Donkey Kong Sr. had aged and withered to become Cranky Kong) and then had their version of Donkey Kong go on to play the hero in several games… So to have him suddenly acting like the original Donkey Kong all of a sudden seems like a weird story development, as well as being a little disrespectful to Rare’s work.

The story in general is pretty weak for this game: Mario has a new range of toys out called Mini-Marios and, for some unexplained reason (possibly hypnotism) Donkey Kong becomes completely obsessed with them, breaks into a factory and steals a whole bunch of them. Mario then sets out to get them back. I know Nintendo games aren’t known for their great stories, but since when does Mario own a toy-making business and why does Donkey Kong care about them? At least the Mini-Marios are very cute.

So, let’s get to the most important thing: the gameplay! As I mentioned above, it’s quite similar to the Game Boy game Donkey Kong; levels have Donkey Kong running off and going through a door which he locks behind him, so you have to find a key and then bring it to the door to get through (which always requires a degree of puzzle solving). The problem is that it is so like the Game Boy game, that it just comes across as a poor imitation to me. The Game Boy game had unique levels, whereas this one uses generic locations you’d find in any Mario game and while some are quite fun, many are bland. The one unique thing this game does is give you levels where you have to guide Mini-Marios through obstacles and then put them in a box for safety. This sounds like a fun idea, but the problem is that the Mini-Marios just follow you mindlessly, get in your way, react too slowly and often seem to be killed because of their own lack of intelligence, rather than down to anything you control.

On the whole, while I have been quite negative in this review, I wouldn’t say this is a bad game. It’s just very ‘middle of the road’: not terrible, but not in any way exciting. If you were thinking of trying this, but also haven’t tried the Game Boy game Donkey Kong I’d definitely go for that over this.