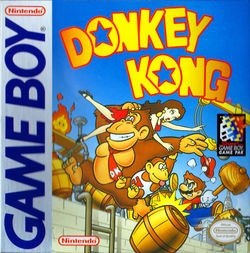 If somebody bought this and started playing without any real foreknowledge, they may do the first one or two levels and think it was nothing more than an enhanced port of the original Donkey Kong, but that’s not the case at all. All four of the levels from the original have been nicely remade (with better graphics and control scheme) as the opening for the game, but after that there are nine whole worlds for Mario to make his way through in his hunt for Donkey Kong (who, once again, has kidnapped Pauline).

What I like quite a lot about this game is that it’s very unique. The nine worlds Mario goes through are all quite different to any of the worlds in other games; one level has you making your way through a big city, another has you chasing Donkey Kong around on the outside of an aeroplane mid-flight. Also, each level isn’t a case of getting from the start to the end, instead you are required to think a little more; Donkey Kong runs ahead with Pauline and goes through a door which he locks behind him and in each level you have to find a key and you win by bringing it to the locked door.

Another interesting thing about this game is the fact that this game has the same system for attacking enemies as Super Mario Bros. 2 which is quite different to the norm. Instead of just being able to jump onto enemies to defeat them, you either have to pick something up and throw it at them, or pick up another enemy and throw them at each other. This helps further give this game it’s own very unique feel, because while it does have elements from other games, it uses them in new ways and combinations.

I think this game serves as a grand finale for the old Mario/Donkey Kong conflict, there are nice references to the games that came before it and, frankly, this game stands a full head and shoulders above all the rest. It took me eight and a half hours to complete this game compared to the twenty minutes or so you can beat any of the others in, and I like that. It’s the only one of these games to have any real soundtrack too, and there is some very nice music indeed in some areas. I have a feeling that this game may have been made as a tribute to the early Donkey Kong games as it came out the same year as Donkey Kong Country which completely changed the direction of the series.

Overall, a wonderful little game which can feel very rewarding at times. Rating: 8.5/10