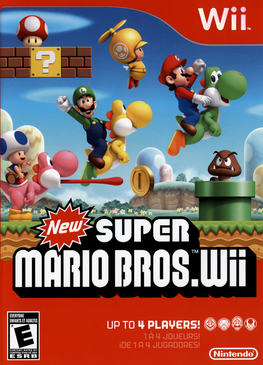 New Super Mario Bros. was a big success, so it was only natural that Nintendo would follow it up with a sequel before too long. New Super Mario Bros. Wii was a Wii title, which meant that it had the capacity to do things which were not technologically possible in the first game.

I won’t even bother to dedicate a paragraph to the story, like I usually do, since it’s so minimal (Bowser kidnaps Peach, you must rescue her), so I’ll get straight on with talking about the gameplay. It takes the classic play-style of the old 2D platformers, but it really perfects the control scheme and polishes things up nicely. At the same time, new features are implemented too, such as the very handy new power-up the Propeller Mushroom which launches you into the air and gives you a slow decent.

Significantly, this game features a very fun co-operative mode for up to four players. Players 2, 3, and 4 take control of either Luigi, a yellow Toad or a blue Toad and you work together to get through the levels. I find this very fun and it adds an exciting new dynamic to everything. Things get very competitive, and oftentimes you’ll find you’re in a situation where either you have to let yourself be killed, or do something which will leave your fellow players killed. Other than the yellow and blue Toads being boring choices for character slots, there’s not really anything bad I can say about this new mode.

But, even if you don’t have any people to play with, playing by yourself is its own experience which can be just as fun and rewarding. As you may be able to guess from the cover art, Yoshi has been brought back into the mix and being able to ride him makes things even better, though it is a shame that he’s only available in certain stages. A less welcome return is that of the Koopalings (Bowser’s distinctive young underlings); on the one hand it’s cool to see them with 3D models for the first time, on the other, it does mean that the boss stages are quite predictable.

On the whole, a very fun game and one which builds over its prequel. However, if you have played the first game, this might feel a little like an expansion, rather than a wholly new experience, but as there are a lot of nice new additions, you should still be happy with it. Rating: 9.1/10