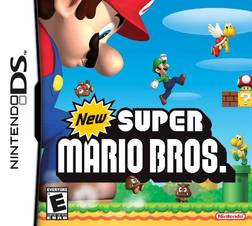 In 2006 it had been over a decade since the last 2D platforming Mario game and so, when New Super Mario Bros. brought back this classic formula, it was very exciting news! It was a real treat for the fans, while simultaneously being accessible to new players too.

Story-wise, there’s nothing new here. Once again, Bowser has kidnapped Princess Peach and, once again, Mario must travel through eight worlds in order to track her down and get her back. I’d not like to complain too much though, because this game is intentionally made to be a throwback to the older Mario games that had quite simple stories like this. Plus there is also a slight degree of mystery and an unexpected plot-turn or two, so, I can’t fault it here.

In terms of gameplay, it takes the classic Mario formula, polishes it up and adds quite a few nice things. One thing I like is that the controls have really been perfected, which may feel like a small thing, but actually it’s a big part of what makes the game fun to play, and something which might be overlooked. There are classic elements like fire bars, flag poles and Bowser waiting on a drawbridge, but there are also brand new things like the Mega Mushroom which turns you into an indestructible giant, the blue shell that lets you roll along like a Koopa and I found the boss battles to all be pretty fun and unique (one in particular is very memorable).

Beyond the main game, there’s also a collection of mini games available (some of which previously appeared in Super Mario 64 DS) and a very fun multiplayer mode. In the multiplayer mode one person plays as Mario while the other plays as Luigi and you run around in levels fighting to collect the most stars. Some of the smaller mini-games are also multiplayer, which is quite fun.