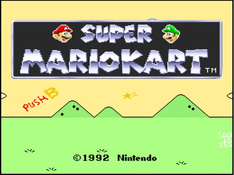 I’m sure that everybody’s familiar with the Mario Kart series in one way or another, and this is the game that started it all. In its first instalment, the series isn’t quite what it would later become, but this is still a good game.

Presumably due to the limitations of the time, there is only a selection of eight characters: Mario, Luigi, Peach, Toad, Yoshi, Koopa, Bowser and Donkey Kong Jr. The small number of characters doesn’t really bother me very much though, and I’m actually quite pleased that you can be Donkey Kong Jr. (who at the time of writing has never returned to the series.) There are, however, twenty different race courses which is quite a nice number. While one or two of the tracks may have similar aesthetics, they all have layouts that make them different enough for me to enjoy them as unique experiences.

The single player mode gives you the option of two different classes, 50cc and 100cc, (and a time trail mode) with one being easier than the other and each having a handful of cups to win. I had a lot of fun racing through 50cc mode with the only potential downside being that it was perhaps too easy. There were several times when I lapped the racer who was in last place. Then I started doing the cups at 100cc. All of a sudden, things seemed to be quite challenging. I certainly wasn’t lapping anybody any more. But it was all in good fun. Once that’s done (and I hope this won’t be considered a spoiler) you unlock 150cc mode which, for me, was an absolutely insane level of difficulty.

The CPU racers in this game work in a way which, on 150cc mode, can be extremely frustrating. You see, each racer isn’t out to win; each racer is out to ensure that they will come in their designated position and that you will come last. So it’s very much a case of you against them. They also don’t seem to be slowed by going off-road, whereas you are slowed very significantly.

But that’s not all. Most significantly they have an unlimited supply of items. In the game, you go over item boxes and then get something which will help you in that race (a mushroom to go faster, a shell to throw at other racers) but the CPUs don’t get anything from item boxes because they all have an infinite number of one kind of item which matches their character (often ones you cannot use yourself). For example, Donkey Kong Jr. has unlimited bananas which he’ll drop to make you skid out of control if you’re behind, or throw ahead of you, if you’re in front of him.

Does that seem a fair trade for your scattered access to every item? Well, I’m afraid it isn’t. Mario and Luigi have unlimited stars, and that means they have unlimited invincibility and merely touching them will make you skid out. Oh, and it makes them go faster too. You’d think that the annoying thing would be the fact that you’d then be unable to slow them down with your own items, wouldn’t you? Well, every CPU character can just jump really high in the air to avoid any items anyway, so, you’ll probably miss them half the time! You lack this magic jump power, by the way.

But I don’t want to give this game a bad review. It is still a good game. There’s also a multiplayer mode which will probably be the main feature for anybody who has somebody to play with. Playing with a friend is very fun and it suffers from none of the downsides that the single player mode occasionally does. There’s also a ‘Battle Mode’ where two players can fight against one another in their karts, using the items. It’s sad that only two people can play together, but it’s good fun even with two.

This is a game that’s definitely worth a try, but its later difficulty can’t be understated. Rating: 8.5/10