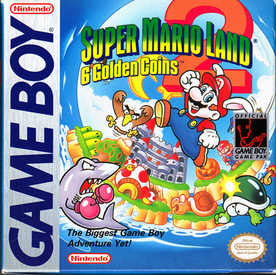 After the success of Super Mario Land there’s no surprise that it was eventually followed up with a sequel. For once, I’m actually pleased with the sense of continuity and ongoing narrative, as the story behind this game is quite clever: while Mario was off saving the day in Sarasaland, Wario took control over his castle back home and, in fact, had been the person behind all of the bad goings on in Sarasaland! Very good, for the Super Mario series.

Speaking of things I like, this is the game that introduced us to Wario. For those who don’t know, Wario is a kind of evil twin to Mario. He’s a greedy, money-obsessed character with a comically bizarre design. Wario has gone on to be a regular character in the Mario series and has even gone on to have his own series of games. Right from his first appearance he’s very likeable and it is the introduction of Wario, perhaps, that is this game’s best feature… Even if he is only the final boss.

But there’s something strange about this game. There are a lot of things about it which, independently, I like very much, for example: there’s a nice big over-world map, unique choices of enemies (such as the three little pigs) and unusual level locations (like the inside of a whale) but despite all of these qualities, things just don’t quite gel for me. The soundtrack is generally quite bland and the controls feel quite floaty and just generally ‘off’ so I wonder if these two things might be what’s spoiling my enjoyment of it.

It’s by no means a bad game and, if you can find a cheap copy of it, by all means give it a try because maybe you’ll like it more than me. I just feel like the game has a good premise and lots of good ideas and it’s all the more disappointing because of that. It could have been a superb Mario game, but for me it just misses the mark.