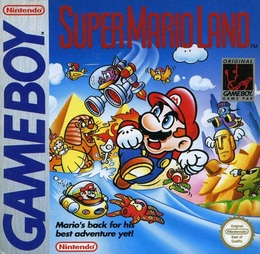 The Game Boy was Nintendo’s first real portable console and, as I’m sure you can understand, they were keen to get a brand new Super Mario game ready to be released alongside it and Super Mario Land was that game.

Super Mario Land has a lot in common with other 2D platforming games in the series, but also has a fair few elements which give it a unique identity. Usually Mario travels through the Mushroom Kingdom in order to rescue Princess Peach from Bowser, but this time he travels through Sarasaland in order to rescue Princess Daisy from Tatanga. On the one hand, Tatanga is an interesting and mysterious villain and I wish he had appeared in more games, on the other, Princess Daisy is basically Peach but with a different colour scheme (and she is the one who’s gone on to make lots of appearances, but I guess some people like her, so I shouldn’t complain).

However, while the change of characters is interesting, I think the best thing about this game is the change of setting. Sarasaland gives you creatures and locations that you don’t find in other Super Mario games, for example you’ll find yourself exploring ancient temples, or in a place based on Easter Island (with Moai-like creatures!) and even a place based on ancient China. Sure, you’ll see some enemies that look like the creatures you’re familiar with from other games, but even they are a little different. What’s most exciting is that, unlike the Mushroom Kingdom, Sarasaland cannot be entirely transversed on foot and some levels have you driving a submarine or airplane!

If that all sounds quite exciting to you, there’s something you need to bear in mind: it’s very short. There are four worlds and each of those are made up of three individual levels, so, that is only twelve levels for the whole game. I completed the whole game twice (once normally and then again in hard mode) in only forty minutes. At the risk of sounding arrogant, maybe I’m just very good at it, but I think most people might make short work of this game. But I think it’s always important to remember “quality over quantity”; in many ways it feels like a better version of Super Mario Bros. and that game has more than double the number of levels. I like Super Mario Land for its unique levels and enemies, having a catchy soundtrack and for just being generally enjoyable.

(This game can also be downloaded in the 3DS eShop.)