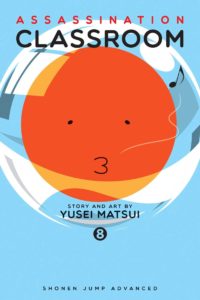 As much as I enjoyed all of the volumes of Assassination Classroom up to this point, if there was one small criticism I had to give, it would be that Koro-sensei stops tensions from getting high. Sure, there’re his claims that he’ll destroy the planet in a year, but that’s in the future and in the meantime there’s a super human smiley face creature who’ll protect the children from any threats with his endless abilities. However, following Volume 7, Koro-sensei has been reduced to his Absolute Defense Form and so is unable to help or protect them in anyway (other than talking.)

The new dynamic in this volume creates some really intense drama. It’s just the kids up against some of the most skilled assassins in the world. Do they have what it takes? Well, I won’t spoil anything for you, but I was genuinely concerned for the characters’ lives – and not just the characters facing the assassins. Don’t forget that the previous volume ended with half the students being infected with a deadly virus!

You may wonder why it would just be the kids when the likes of Mr. Karasuma are around, but he and Ms. Jelavitch are soon otherwise incapacitated as well. Really, this volume documents an important learning experience for the children – they now have to put into use the lessons that their teacher has taught them with no safety net. Of course, Koro-sensei remains able to impart his wisdom, but that’s all. It is up to the children to listen to him.

Honestly, this was a fantastic read and a new height for this manga. There are some big revelations towards the end, but things still aren’t wrapped up neatly. You won’t be able to wait to read the next volume because the stakes are so high and at the end… the unbelievable happens. No spoilers, of course, but a lot of big things happen. The best volume yet.