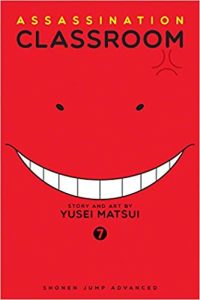 Volume 6 ended with the cliffhanger of looming exams and Volume 7 starts with those exams taking place. Once again, these are represented as epic battles between the students and large monsters. Though I generally don’t find exam storylines to be as exciting as other, I do have to admit that this is a clever way of portraying the in a visual medium.

However, once the exams are all wrapped up, the action moves to a tropical island resort. Here the students plan out the perfect assassination – something which could they’re sure could never go wrong. I really appreciated this change of setting as keeps the story nice and fresh (rather than just always being in the classroom.)

I have to say, this volume does just about everything right. There’s a lot of comedy and affability from Koro-sensei, but also a lot of high-stakes drama. I really enjoyed the big attempt on Koro-sensei and the consequences of that (I won’t spoil anything) and by the end, things are much more serious than they have ever been in any volume up to this point. It’s hard to stop reading. But at the same time, some of the moments in this are some of the funniest so far. There’s a good mix.

So, if you’ve read up through the first six volumes and are wondering whether or not to get the next, definitely do it. This is such a good instalment and I regret not instantly starting to read the following volume when I finished it. I’m reading something else now, which I’ll force myself to finish first. It’s by no means bad, but Assassination Classroom is just in this sublime realm of its own.