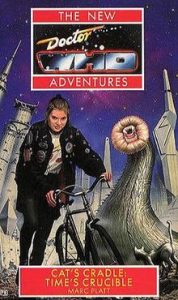 Coming fresh off the heels of the exciting finale to the four-part Timewyrm series, I was really keen to find out what the next of the Doctor Who New Adventures would be. Since the title doesn’t give anything away, all I really knew was that it was written by Marc Platt, who had worked on the TV series around the time of its original cancellation. Since I liked a lot of the ideas that he had for the show, I was keen to see what this novel would be about.

And he certainly delivered in terms of interesting ideas. We get a glimpse of Ancient Gallifreyan society, which is cool and we also find out more about the history of the Time Lords. It’s clear that Platt wanted to expand the Doctor Who Universe and he’s done a great job of that.

Too bad the novel is really boring to read. Yes, as much as I appreciate many of the ideas in this book, I just didn’t think it did well in terms of delivery. It felt like the Doctor, Ace and all the incidental characters were just running around a bunch of ruins for ages. It was interesting right at the start and then again near the end, but the middle seemed to drag on for so long without many interesting developments.

What further cemented this as not very good for me, is that all the characters seemed to have really stupid sci-fi names and it was hard to imagine them as real people and to really care for them. They weren’t unlikeable or anything like that, they were just very bland.

On the other hand, The Doctor and Ace are, of course, two exceptional characters. The problem is that The Doctor is absent for a large amount of the plot, meaning that all the focus is on Ace. Unlike earlier novels, which had given us amazing insights into Ace’s mind and life, this all felt very surface level and I didn’t feel like I knew her any better afterwards.

Because it was Doctor Who, I kept going and because it was Doctor Who there were sections which I kind of enjoyed. I don’t think this says much for the book. The main thing I like about it shouldn’t be the fact that it was connected to something bigger that I already like. I will say this about it: it told a story they’d have never been able to tell on TV at the time, which is nice. Ironically, when I looked it up, it turned out to be an unused TV idea, so who knows what to think?

It’s possible that the Cat’s Cradle story arc will pick up in later instalments (and I hope it does) but as things stand, I do not recommend this book… Not even to really dedicated fans, really.