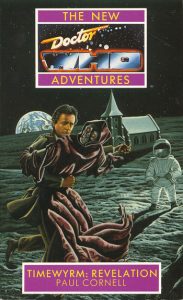 Timewyrm: Revelation is the final novel in the four-part Timewyrm series and, I have to say, it provides a really thrilling finale. After the series had taken a bit of a misstep with the third book, I was a little less enthusiastic about starting this one, but I shouldn’t have been worried because I think it might just be the best one so far!

The story is a really interesting one and I think the easiest way to describe it is like this: the Doctor and Ace both die and go to Hell and then they need to figure out how to escape. I’m sure that sounds fairly silly, but it’s actually pretty good and, don’t worry, its all still given some form of scientific basis.

One aspect of the novel which particularly appealed to me, was that it had a real emotional centre. We get more glimpses into Ace’s life prior to meeting the Doctor (and I just find myself liking her more and more) and we’re shown the emotional (and mental) toll that the Doctor’s lifestyle has on him. It’s amazing and I really liked that these two characters were taken completely seriously throughout. They (and the relationship they share) received some significant development.

What was also very appealing to me, was that the entire novel was very surreal. As you can see, the front cover shows the Doctor dancing with Death on the moon, as an astronaut watches on with a church in the background. This is an actual scene from the book. Perhaps the best way to put it, is that the book feels a lot like a dream and I like that very much indeed. It’s hard to get surrealism right in writing, but Paul Cornell has done just that.

Fans will also be pleased by the fact that there are several significant cameos by characters from Doctor Who history and the story really helps to make everything feel connected. Oh, and what pleased me enormously is that we find out that the Doctor once went to a party in Bath – I’m sure that fact isn’t too exciting to most people, but I was absolutely delighted, since I love the city so much.

Overall, a really good read and one of the best Doctor Who novels I’ve read. It does require a fair bit of pre-existing knowledge of the series, so I definitely wouldn’t “jump in” with this one though! My recommendation is to read all four novels about the Timewyrm books, because the pay off in this finale is so, so worth it.