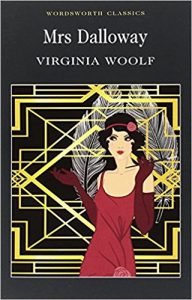 Mrs Dalloway is the first Virginia Woolf novel that I’ve read and, going in, I wasn’t really sure what to expect. I hadn’t even read the blurb! My first impression, was that the style felt quite similar James Joyce’s Ulysses. This worried me a bit, because I really didn’t enjoy that book (sorry, James) but as I read on, I actually found it to be far more interesting and enjoyable to read.

Anyway, Mrs Dalloway tells us the story of one day in the life of Clarissa Dalloway as she prepares to host a party at her home. Written in the 1920s, this novel was set in the modern day  and Clarissa is an upper class person who’s married to a politician. If somebody had asked me, I’d have probably said that I would have nothing in common with a woman like that, but as I read through the book, I found that I related to her in many ways (and to several of the other characters too.) They say that the purpose of literature is to capture the universals of the human experience and I really feel that Virginia Woolf has done that in this book.

The story jumps between the perspective of several characters whose lives cross paths during that day and we get to see inside the heads of all of them. Through their experiences, we get internal monologues on mental health issues, friendship and even non-heterosexuality. All subjects I am very interested in. Considering that this was published in the 1920s, I was impressed by how enlightened and progressive it seemed to be. Not that the characters don’t have their flaws – they do, but they’re all very real and very human.

It’s quite a short book on the whole (about 140 pages) but I feel like this is just the right length for a book which tells a story confined within a single day. Perhaps, if it had been any longer, it might have started to get a little boring or grating. But as it stands, it was a very enjoyable read. Its short story is definitively not without it’s drama (it was pretty shocking at one point in particular) and I would recommend it to anybody who likes classic or literary fiction.