The Social Contract by Jean-Jacques Rousseau (translated by Maurice Cranston) 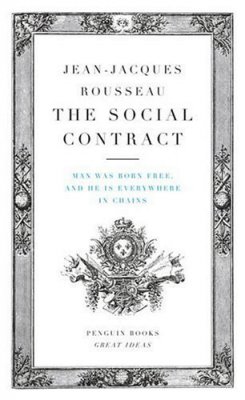 This book is a non-fiction philosophical work in which Jean-Jacques Rousseau sets out the ways in which he believes a state should be correctly run. Interestingly enough, it was one of several things which sparked off the French Revolution.

In the book, he discusses the different types of government and the way that each of them would work best. You can see, at several times, that he is rather critical about the way most monarchies tend to turn out. While it is nice to hear what he has to say about monarchies, today the criticisms are quite dated since the idea that somebody has a ‘God given right’ to rule a country is pretty much discarded by most of the western world. I guess we are standing on the shoulders of giants when it comes to morality.

On the other hand, some things Rousseau has to say are still very important in today’s world. For example, there is one point where he talks about dictatorships and how they are sometimes necessary to ensure the wellbeing of the state and its people, which is rather interesting. Even if I’m not sure that I agree.

Furthermore, as well as containing philosophical ideas, you can also learn a little about history in this book. There is a particularly good chapter where he discusses the formation of Rome and its early days. He often backs up his arguments with examples from history.

The best part of the book, for me, was a lengthy chapter at the end where he discusses the role that religion plays in the politics of many states.  To put is very basically, he says that all religious views should be accepted, aside from those which are intolerant of other perspectives. He says that it is quite damaging to a state when intolerant views are allowed to grow within it. He argues from a Christian perspective and says that true Christians should have no objection to people believing/practising other belief systems and should definitely not preach that they will be condemned to Hell for them. Weirdly though, he says that this ‘true Christianity’ existed in the past, whereas I always felt this was more of a modern evolution of the religion.

On the whole, this book is definitely worth reading, but it does have a few flaws. As well as the fact that a few of his points now seem somewhat dated, the older language style occasionally makes reading slightly hard, and there are also a couple of chapters which are really just a bit boring.

This entry was posted in Book Reviews, Philosophy. Bookmark the permalink.