The Tempest by William Shakespeare 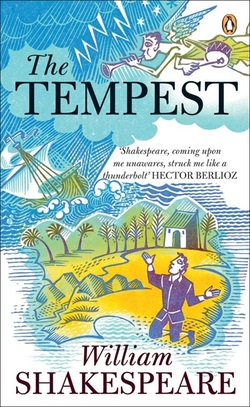 This is one of Shakespeare’s comedic plays and I really did find it to be quite funny at times. It’s a bit of a weird story, but it’s not very long so if you have any kind of interest in Shakespeare I think this is one you should try.

The story is about a man named Prospero who has been exiled to a small island for political reasons and he lives there along with his daughter Miranda and servant spirit Ariel. An extremely unattractive man named Caliban also lives on the island and he, along with a man named Trinculo and another named Stephano plan to assassinate Prospero.

Probably my favourite thing in The Tempest was Caliban. He is the son of a witch named Sycorax and this somehow means that he is incredibly ugly. Nobody seems able to resist making jokes about Caliban and treating him as if he is sub-human and he pretty much just takes it. It’s so mean, but it’s also so funny. The scenes of he, Stephan and Trinculo were probably my favourite as they all just seemed to be a group of incompetent rogues and were highly entertaining. Having said that, Caliban and Prospero had some kind of falling out due to a ‘betrayal’ on Caliban’s part, and while I never really understood what the betrayal was, Wikipedia says that he tried to rape Miranda, which turns him, in my eyes, from a comically villainous person into something much darker.

The scenes with Prospero were slightly less exciting. He’s often talking with his daughter Miranda and somebody named Ferdinand, and we watch as a romance grows between the pair. The romance all seemed so forced and uninteresting though and, had the fairly interesting Prospero not been present I’d not have had much interest in those parts of the story at all.

The is a short read, and a nice bit of light entertainment, but it’s nothing incredibly thought provoking or moving. Rating: 7.3/10