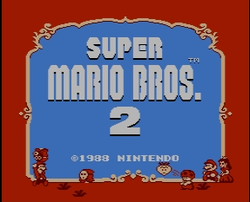 After the success of the original Super Mario Bros. of course there was going to be a sequel. Interestingly, there were actually two ‘second’ games in the series, a Japanese one and an American one. The Japanese one was considered too hard for overseas gamers and so the rest of the world instead got a remake of the game Doki Doki Panic which had been changed to include Mario characters. This is a review of the American version, and while it is technically a remake, I will review it as its own entity and will hopefully get a chance to review the original at a later date.

Story-wise, this game differs quite considerably from all of the main Mario games; for one thing, Princess Peach isn’t kidnapped and is even playable! Here Mario dreams that he goes through a doorway and visits a strange world, then he wakes up and tells Luigi, Toad and Peach about it, only for them to discover the door in real life! It’s a bit weird, but nice.

This game has four playable characters and this changes up the gameplay quite a lot. First, there’s Mario. Mario fills his usual role as the ‘all-rounder’ and actually controls a lot better than he ever had before this point. Second, you have Luigi. Luigi is probably the character who requires you have the most skill to master. He jumps extremely highly, but he’s also very slide-y and float-y. Third there’s Toad. Toad’s a bit faster than the others, but he can’t jump as high (not very exciting). And finally Peach. For once she isn’t the damsel in distress and they’ve really taken it completely in the opposite direction by having her be the best of all the characters (at least in my opinion). Peach controls quite nicely (she isn’t slide-y or anything), she can jump quite high and she can also float in mid-air if you hold down the jump button. This skill is invaluable in the areas of trickier platforming and it’s what makes her my favourite.

But it’s not just the characters that I like about this game. Instead of the Mushroom Kingdom, this game takes place in a world called Subcon and the whole place looks a lot different. Instead of dirt roads and castles, you’ll be travelling through deserts (with an oasis or two), icy places and caves with rivers flowing through them. It all seems a lot more natural and has much more of an Eastern feel to it. Also, since this isn’t the Mushroom Kingdom, you won’t be finding Koopas or Goombas, but instead Shy Guys, Birdos, Pokeys and Bob-ombs in their place as the enemies, which is a refreshing change. Curiously, the attack system is also different, instead of jumping to squash them, you have to jump on them and then pick them up to throw them.

On the whole, this Mario game is sadly often over-looked and many elements of it have been forgotten. I personally prefer it over the original and find it to be very fun indeed. Unfortunately, there’s still no save system though so I suggest you play it with save states. Rating: 8/10