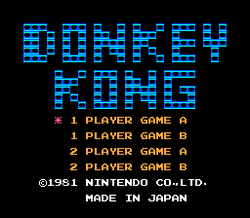 This is an important game for lots of reasons. Firstly, this is the first appearance of Mario and also the first appearance of Donkey Kong, both of whom would go on to feature in and inspire various games. Furthermore, this was the first really successful game made by Nintendo; had they not had this success they may not have gone on to make Super Mario Bros. which would have made the face of gaming today very different. But while this game is certainly of historical interest, is it still a fun thing to play?

The story is very basic: Donkey Kong has kidnapped Mario’s partner Pauline and Mario must travel through a few levels in order to rescue her. It’s nothing in-depth, but this isn’t the kind of game that requires a ground-breaking story.

Each level fills an entire screen with Donkey Kong standing with Pauline at the top while you, as Mario, must make it to the top, dodging barrels, fire balls and various other hazards along the way. There are four levels and it shouldn’t take more than a quarter of an hour to complete it, but once you’ve done the last level, you go back to the first and you can loop it forever to try and get the highest score, the difficulty increasing each time. It’s actually quite hard to begin with too. An important thing to bear in mind is that the NES version of the game cuts out the second level (which is my favourite) and it’s the NES version that is available on the Virtual Console and the Game Boy Advance. If you want to play the second level, you will need to play this game on Donkey Kong 64 or in an arcade

The game has a multiplayer mode too, but it doesn’t add much to it. Two players take it in turns to do the levels and compete for high scores. It’s nice in a way because it encourages people together, but it’s not really anything that couldn’t be done by playing at different times.

I think the biggest downside of the game is how Mario controls; he walks really slowly and he doesn’t jump very high either. He also dies awfully easily: everything kills with one hit and there’s nothing you can do to change that. Even falling relatively short distances kill him! Having said that, there is a rather useful hammer you can use for a limited time which will destroy most things which come towards you, but which still doesn’t make you entirely invulnerable.

On the whole this is an early video game, and you can tell it’s an early video game, but it’s still fun and certainly worth a try for Nintendo fans and anybody interested in old arcade titles. I doubt that it’ll be your all-time favourite, but you’ll probably consider it worth your time to go through every now and again.

Buy it here for the NES.

Buy it here for the GBA.

Buy it as part of the compilation Donkey Kong Classics here.

(This game can also be downloaded from the eShop for Wii, 3DS, Wii U.)

(I do not own the copyright of the screen capture.)