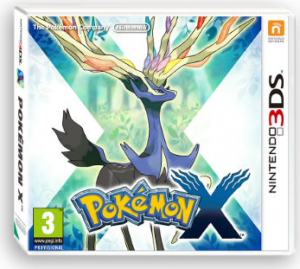 Pokémon X and Pokémon Y were the first two Pokémon games for the 3DS and also the first main series game to be in 3D.

It’s very nice to see the world of Pokémon in 3D for the first time, but it’s essentially just a new art style that does nothing to effect the gameplay. There are one are two bits which really feel like full 3D, but the controls and camera don’t feel quite right and so I suppose it’s for the best that they mostly stuck to the usual play style.

Having said that, I don’t want to suggest that this is a bad game, or even that the 3D in this game is a detriment. It’s really good to see all of the Pokémon battles carried out with full 3D models for all Pokémon and the game’s many locations (especially the gyms) all look very good being laid out in proper 3D. On top of everything looking very nice, there’s also an especially good soundtrack which just helps to give the game a really good atmosphere.

As usual, this is a game where you start out as a lowly Pokémon trainer and set out to catch as many Pokémon as possible, train them up, beat the game’s eight gyms and then defeat the Elite Four. The additional story that surround this is a little deeper than usual and fairly emotional too, which was an aspect I was rather pleased with. Another new addition is that of Mega Evolution – now, for only limited periods, your fully evolved Pokémon can evolve one step further and become even stronger. Mega Evolutions tend to look pretty cool and they also add an interesting new angle to the game’s battles.

One thing which was quite noticeable to me was that things felt a lot easier this time around. There are multiple times when you’re just given strong Pokémon, you get given an EXP Share right at the start to make leveling up much faster and none of the gyms ever felt very hard. The EXP Share was a much appreciated time saver, but I wish I’d gotten a few more challenges from the end of the game. I’m not mentioning this as a bad thing (on the whole) but it’s definitely something I noticed.

Overall, this was a very enjoyable game. Some of my favourite new Pokémon introduced in this game include Greninja (a ninja frog), Klefki (a key ring), Xerneas (the legendary deer on the box of X) and Trevenant (an ancient tree spirit) and obviously there are many others which you also might like a lot. It may not be the best main series Pokémon game, but all main series Pokémon games are good!