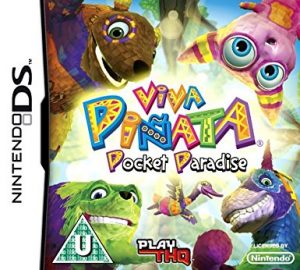 This game is very similar to Viva Piñata for the Xbox 360, but in case you’re not familiar with that, I’ll go over it now. Basically, you’re given a garden and you need to attract all different kinds of animals to come and live in it (except, rather than animals, they’re actually living Piñatas). There’s a nice range of creatures you can have, including hippos, horses and cows, and there are very different things you need to do to attract all of them. Once you have them safely living in your garden, you have to build them a house and persuade them to mate. It’s all very fun, and has an addictive ‘catch ’em all’ feeling to it.

But, while you’re doing all of this Piñata catching and breeding, there are obstacles that will make things harder. Every so often, either a sour Piñata or a Ruffian will come along and cause trouble. A sour Piñata is just a bad Piñata really, and it will try and destroy your plants or the creatures living in your garden. Ruffians are worse; they work for a man called Professor Pester, and will destroy anything they come across (even buildings) unless you pay them off.

It’s a nice mixture, I feel; while it is a ‘life simulation’ game, there are still problems for you to face and overcome. The more you progress in the game though, the easier the problems are to overcome and I think that, perhaps, this should be the other way around. I sometimes also feel that the garden is too small, you’ll probably get to a point where you have the maximum number of Piñatas you can have, yet still want to have more living there. But still, these are minor problems, and I certainly enjoyed catching all of the brightly coloured Piñatas and creating nice homes for them. Also one thing I really like about the game is the fact that there are references to other Rare games throughout the game, and since I’m a fan of the company, I really appreciate that.

You may worry that an Xbox 360 game could never be properly converted to a Nintendo DS game, but I feel like it was done very well. While the graphics have been watered down, the soundtrack has been replaced by something completely different (but equally good) and, if anything, the touch screen controls are more convenient to use than the more conventional controls of the original. It works really well on the system and is one of my favourite DS games.