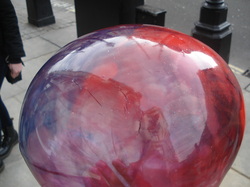 On Saturday, I popped down to London to spend the day with my internet friend Mairi Mac Arthur. During that day, we did various fun and exciting things, one of which, was visiting the big toy shop, Hamley’s.

As we were heading out of the shop, Mairi spotted a man who was making balloons out of some kind of slime, and so the pair of us stood and waited for him to make another so that we could see how it was done. Unfortunately, however, he didn’t seem to be making another one.

“Oh!” I said as I wandered over to him, Mairi following me, “You mean me don’t you?”

“Yes, well, what is that on your shirt?” he asked, perhaps rhetorically.

“A smiley face,” I replied.

“Exactly!” he said with a smile. “And what is that in your pocket?” he pointed at Colin, “a duck?”

“Oh a cow!” he said, suddenly even more excited, “So, you like cows then?”

“What a coincidence! I am too. You,” he said pointing at Mairi, “why are you stood there with your arms folded, where is your smiley face shirt?”

“I don’t have one,” she said, but she did unfold her arms and smile – perhaps to make up for the lack of one on her shirt.

“Where are you from?” he asked us both.

“Oh, Scotland!” the man sounded extra excited again. “That is the place with the monster isn’t it? The underwater monster.”

“Yes, the underwater monster! Have you ever seen him? You know, there is a very vast system of caves under the water, and there are four of them who live there, a mama monster, a father monster and two baby monsters. The reason nobody ever sees them, is because the people who look for them all look like very serious people, they don’t look like they’re any fun at all. So, if you do want to see the monsters, here’s what you do: go to the lake in a smiley face shirt and they come right out to see you! I can see you’re laughing, you don’t believe me, but it’s true! How do I know? Because I’ve done it myself! I’ve seen them. So go and get a shirt like your friend and you’ll be sure to see them!”

The man then grabbed some slime and stuck it onto the end of a straw type thing and blew. The slime then turned into a huge balloon which he placed into my hands. That’s what the photo at the start of the entry is, in case you didn’t realise.

“Thank you very much!” I said in return, and then Mairi and I headed out into the streets along with the slime balloon.

This entry was posted in Anecdotes. Bookmark the permalink.