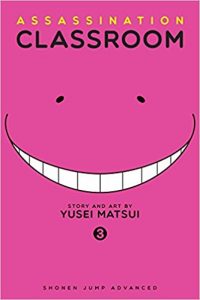 This is the third volume of the fantastic Assassination Classroom manga and, in my opinion, is the installment where it goes from being “very good” to being “absolutely amazing!” So, I definitely suggest picking it up if you read the first two. Do bear in mind that this review will contain spoilers for the first two volumes.

So, as you may remember, the last volume ended with Kayano and Kanzaki being kidnapped by some thugs during a school trip. This, I felt, was a real turning point for the ongoing story, because it was then that it was clear that they’re actually going to deal with some fairly dark subject matter, even if the general premise of a tentacled smiley face teacher who wants to blow up the world is rather absurd. Seeing this story resolved was very enjoyable for me.

It’s not just the drama that I enjoy, though. Volume 3 has some really nice, lighthearted moments. In particular, I am referring to the fact that we get to see the boys and girls gossiping in their dorms during the trip and Koro-sensei is keen to be involved. It probably sounds a bit boring without me actually telling you what happens, but trust me, it’s quite funny and it makes Koro-sensei even more endearing to me.

We’re also introduced to a new character: Ritsu, a new transfer student. She’s actually one of my favourite characters, but she’s… a little unusual. I wouldn’t like to reveal too much about her, as the surprise is quite exciting. Anyway, I really like her and think that she has a lovely little story arc in these chapters (which is also a little bit sad.)

This volume doesn’t leave us on quite as much of a cliffhanger, but I don’t think that really matters. Volume 3 is superb and sees the story coming into its own (if that makes sense.) I highly recommend it.